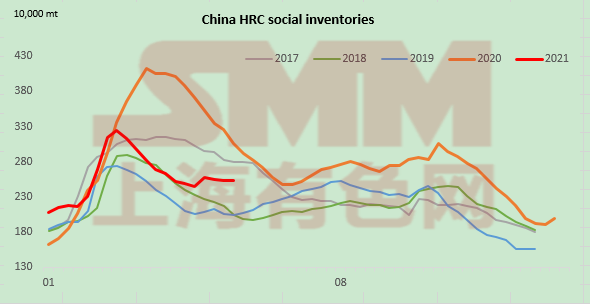 Inventories across social warehouses shrank 7,600 mt or 0.3% week on week to 2.53 million mt. This was 22.22% lower than the same period last year. HRC prices continued to fall recently, while end-user demand improved steadily, which led to the slight decline in social inventories. Traders mostly expected that end-user procurements would increase as HRC prices hit the bottom. 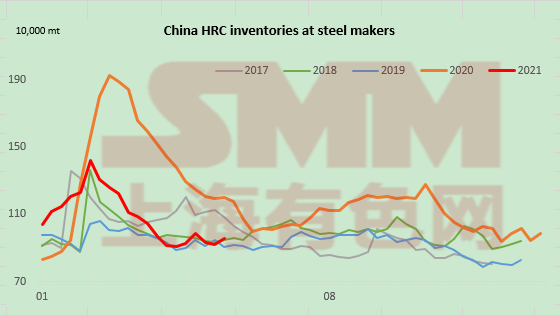 HRC output is likely to shrink as SMM learned that five HRC production lines will be under maintenance in June, which is expected to affect output by about 650,000 mt. End-user demand remained high.

China steel rebar inventory down 2.22% on week
Inventories of rebar across Chinese steelmakers and social warehouses stood at 17.31 million mt as of March 18, down 2.22% from a week ago. From the time dimension of the lunar calendar, stocks are down 17.4% from a year earlier.

MOST POPULAR
1.Stainless Steel Prices Continued to Dip and Expected to Fall Further
2.Why Thermal Coal Prices Keeps Falling
3.China Coking Coal and Coke Prices Fell 19.8% and 16.8% in Mid-November
4.Steel News Roundup (Nov 22)
5.Weaker Demand and Supply Recovery Weighed on Stainless Steel Prices
Shanghai Metals Market
Privacy PolicyCompliance CentreSMM Credit ServiceContact UsAbout UsTerms & ConditionsSitemap
Notice: By accessing this site you agree that you will not copy or reproduce any part of its contents (including, but not limited to, single prices, graphs or news content) in any form or for any purpose whatsoever without the prior written consent of the publisher.