Inventories across social warehouses declined 156,800 mt or 5.26% week on week to 2.82 million mt. This was 27.49% lower than the same period last year. Trades were active this week amid further improved end-user demand, which resulted in the fall in HRC social inventories. 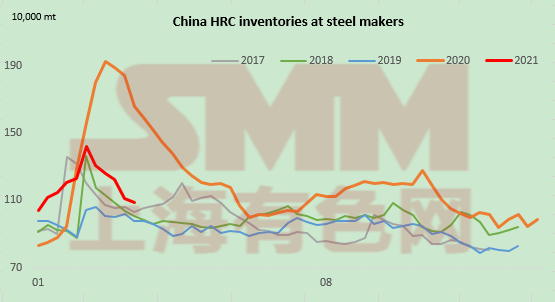 Stocks at Chinese steel makers came in at 1.09 million mt, down 23,000 mt or 2.07% week on week and 40.79% year on year. The decline in HRC in-plant inventories narrowed sharply this week as some steel mills affected by environmental restrictions have gradually resumed production. Five steel makers recovered from maintenance this week.

Steel makers are likely to step up HRC output for its high profits. Robust orders at HRC end users will boost their demand for HRC. Its prices are expected to rise further amid positive fundamentals.