CST
Source:SMM
The resurgence of COVID-19 in Hebei and three provinces in north-east China forced factories in some regions to suspend production for a period of time in early 2021.

SHANGHAI, Feb 3 (SMM)—The resurgence of COVID-19 in Hebei and three provinces in north-east China forced factories in some regions to suspend production for a period of time in early 2021. The impact on logistics was even bigger. Transport disruptions in Hebei, which is the largest wire and cable production base in the north, left many scrap copper rod manufacturers unable to deliver orders and pushed up their inventories significantly. Due to difficulties in sending out finished goods and purchasing raw materials, the off-peak season before CNY came earlier than last year across many industries and end-user sectors, causing consumption of copper scrap to decline rapidly. 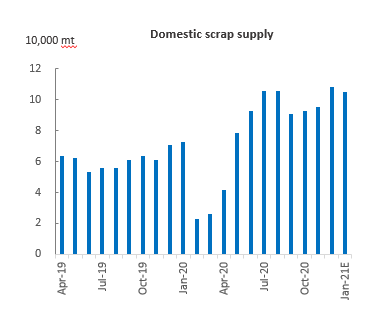 Shipping companies in Hong Kong-south China will close from January 20 to February 20 for CNY, which will severely hamper copper scrap imports in south China. Most import companies will schedule arrivals to post-CNY date as employees are off work during CNY. Therefore, copper scrap imports are expected to decrease in early February. Imports will gradually pick up after CNY, and concentrated arrivals are expected in March.

According to customs data, the import volume of copper ingots in December 2020 stood at 38,100 mt, a decrease of 10.04% from the previous month. Following the implementation of the renewable copper material import standard, enterprises without copper scrap import approvals will no longer need to melt and cast part of the copper scrap into ingots for imports in the form of copper ingots. Their import enthusiasm faded as expected. In 2020, imports totalled 450,900 mt, a year-on-year increase of 109.07%. Aluminium billet outflows from warehouses decreased week by week before CNY and also declined from the same period last year
Trades in the mainstream aluminium billet markets were subdued before CNY. According to SMM survey, most of the small and medium-sized aluminium extrusion producers have closed for CNY, while the remaining showed little interest in stockpiling amid directionless aluminium prices.