CST
Source:SMM
Prices of medium-grade nickel ore remained at $75/wmt in November. Shipments from the Philippines, sold over the previous periods, declined sharply amid the rainly season and cargoes in the spot market thinned.

SHANGHAI, Dec 15 (SMM)—Prices of medium-grade nickel ore remained at $75/wmt in November. Shipments from the Philippines, sold over the previous periods, declined sharply amid the rainly season and cargoes in the spot market thinned.

The FOB prices in January next year has not yet reached an agreement. Domestic ferronickel plants demand lower ore prices amid the losses. The 1.5% bidding prices cif was quoted to $52/wmt by Qingshan, down $23/wmt from the previous mainstream traded prices. Mine were reluctant to accept the price decline. Discussion on FOB was at a deadlock.

Some mines in the northern Philippines indicated that they would suspend shipments if prices declined sharply. All mine ships in new caledonia in 2020 have been sold, and the ore prices in Q1 has not yet been determined. However, ferronickel prices are difficult to rise and the cost was high. However, it is still difficult to determine whether an agreement can be reached in December. Prices are expected to decline in December or January. 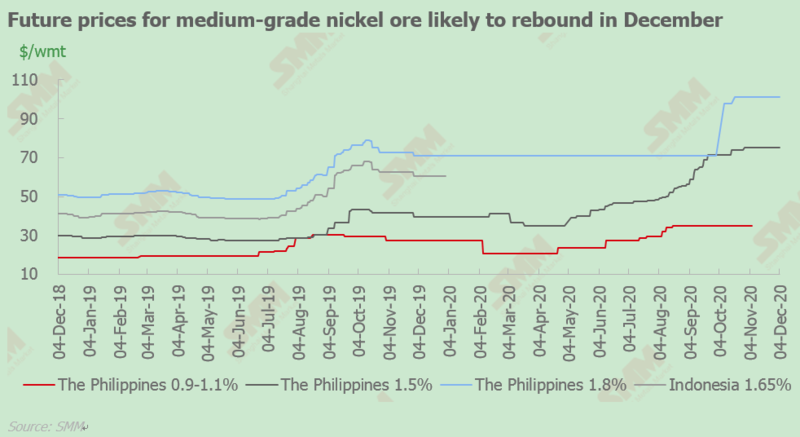 Philippines to ban entry to Northern Surigao for 2 weeks over COVID-19
The Philippines will ban vessels from entering Surigao del Norte from March 18 to the end of the month, growing concerns about nickel ore supply as the country is the world’s largest exporter of the raw material for stainless steel and nickel pig iron (NPI) following Indonesia’s export ban effective from this year. The ban, which has been signed, is aimed at preventing the spread of the COVID-19 pandemic, which has claimed 12 lives out of 140 confirmed infections in the Philippines.