CST
Source:SMM
Operating rates of blast furnaces at Chinese steelmakers increased this week, as some steel mills have resumed production from maintenance.

SHANGHAI, Oct 29 (SMM) - Operating rates of blast furnaces at Chinese steelmakers increased this week, as some steel mills have resumed production from maintenance.

An SMM survey showed that the average operating rate of BFs at steel mills in China rose 0.46 percentage point from the prior week and climbed 0.31% from the previous year to 88.7% as of October 29.

Linfen City, Shanxi Province officially announced at the beginning of this week that it would eliminate the coking capacity of about 5.5 million mt, prompting the coke prices to rebound sharply and boosting the market sentiment. In addition, the third quarter reports of many steel enterprises were released, and most of them exceeded expectations, which once again boosted the market.

Inventories continue to decline at present with the support for demand. However, the Covid-19 situation in Europe showed signs of worsening, and the daily cases in many European countries soared. This has triggered market's expectations of the possibility of weakening demand in the near term, as well as market uncertainty ahead of the US elections.Thus, the spot market is likely to be volatile. 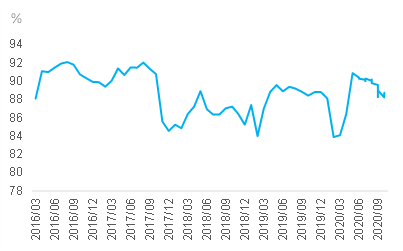