CST
Source:SMM
Operating rates of blast furnace at Chinese steelmakers held largely unchanged on the week as there was no new maintenance this week.

SHANGHAI, Oct 22 (SMM)—Operating rates of blast furnace at Chinese steelmakers held largely unchanged on the week as there was no new maintenance this week. 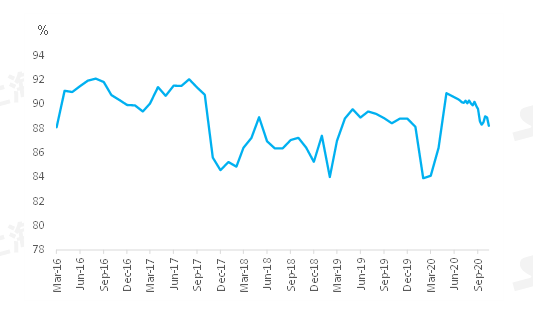 An SMM survey showed that the average operating rate of BFs at steel mills in China edged up 0.06 percentage point from the previous week to 88.28% as of October 21.

This week, the market faced a slew of headwinds. China’s third-quarter GDP expanded by 4.9%, lower than the expected 5.2%. Growth rates in floor space under construction, newly started and completed—which give clues about demand for steel—all dropped. Moreover, real estate sales area and sales volume saw their growth rates fall to 7.3% and 16% respectively. These are expected to weigh on demand for steel products in the next three to six months. Steel prices had plunged under this background, but rallied after investors digested the negative news.

This year’s environmental restrictions were not as strict as last year’s, thus having little effect on output. But recent trading volume maintained above 220,000 mt, suggesting a strong demand, which provided support to steel prices. Meanwhile, coke supply continued to shrink, as Shanxi province will eliminate 4.3m coke ovens by the end of October and Hebei and Henan provinces will also remove more than 15 million mt of capacities by the end of December while new capacities are released at a slow pace. In addition, a fatal accident at a coal producer in Shanxi triggered stricter safety and over-production inspections, which boosted coke and coking coal prices.

SMM expects that steel prices are likely to continue to fluctuate at highs in the near term, but may weaken as the weather turns cold.

Operating Rates of Blast Furnaces across Chinese Steelmakers Stood Flat on Week
Operating rates of blast furnaces at steel mills stood flat on the week and decreased 1 percentage point from a month ago to 81.2% as of July 29, SMM survey showed.