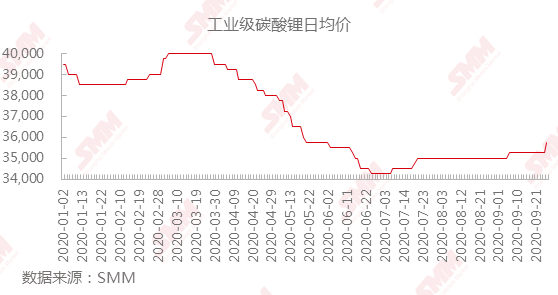 "Click to view the historical price of SMM cobalt lithium

In early September, the price of industrial-grade lithium carbonate rose slightly, the shipments of large lithium salt factories in Jiangxi and Qinghai were good, and the purchase volume at the beginning of the month in the lower reaches increased. Subsequently, industrial carbon prices rose slightly after a period of smooth operation, mainly due to better demand for lithium iron phosphate and lithium manganate, and the operating rate in September may continue to rise slightly in August. According to SMM, the operating rate of lithium iron phosphate is expected to be 54% in September, up 2% from the previous month, and lithium manganate is expected to be 47%, up 3% from the previous month. Downstream demand gradually transferred to the lithium salt end of the shipment situation increased, some manufacturers in Jiangxi in short supply, the fourth quarter signing basically completed.

Looking forward to October, the carbon supply of salt lake industrial carbon and Jiangxi lithium mica quasi-electric carbon will continue to tighten, the carbon production of some salt lake workers may decline, the output of cathode materials downstream of superimposed lithium salt is expected to increase slightly, and it is expected that there is still room for industrial carbon prices to rise slightly in October.

Most Read
feature
1.SMM Webinar Series: China Policies Update
data analysis
2.The rebound in downstream new energy battery production supports the prices of cobalt and lithium
data analysis
3.Macro Roundup (Oct 23)
industry news
4.Demand for high-Ni batteries produced by CATL to reach 33 GWh in 2021
industry news
5.Exclusive: SMM survey of lithium battery value chain in Sichuan
China Metals Market
Privacy policyCompliance CentreSMM Credit ServiceContact UsAbout UsTerms & ConditionsSitemap
Notice: By accessing this site you agree that you will not copy or reproduce any part of its contents (including, but not limited to, single prices, graphs or news content) in any form or for any purpose whatsoever without the prior written consent of the publisher.