SMM9: as we all know, China, as the country with the richest rare earth resources in the world, accounts for more than 95% of the global rare earth demand with 23%, and has become the country's "strategic resource". And China also has the leading global production technology. Data show that in the field of extraction and separation, China accounts for 70% to 80% of the global market share, and the purity of rare earth smelting separation in China has reached 99.9999%. But recently, China's exports of rare earths have slowed down.

China's exports of rare earths totaled 1640 tons in August, down 1.36% from the previous month and a sharp decline of 62.3% from a year earlier, according to data released by the General Administration of Customs today. From January to August, rare earth exports totaled 24378 tons, down 25.7 percent from the same period last year. On the price side, the export price of rare earths rose significantly in August, up 79% from the same period last year.

SMM believes that July and August are the overseas summer break. In addition, under the interference of the epidemic, overseas market demand remains sluggish. According to some traders, the atmosphere of overseas inquiry orders in July is light, and correspondingly, the operating rate of domestic rare earth factories is relatively low, resulting in a sharp decrease in rare earth exports in August from the previous month, and there is no big fluctuation compared with July. In addition, the prices of rare earth varieties such as praseodymium, neodymium, terbium and dysprosium are rising this year, especially the price of terbium oxide has risen to an all-time high of nearly eight years, which also makes the export prices of domestic enterprises rise.

[SMM Analysis] the impact of the epidemic is far-reaching. Rare earth exports fell nearly 70% in July compared with the same period last year.

According to SMM, the domestic rare earth market cooled last week, praseodymium, neodymium, dysprosium, terbium and other mainstream products have varying degrees of pullback; market transactions are sporadic, consumers are cautious to purchase. Light rare earths, lanthanum and cerium still maintain long-term stability, fundamentals and trading conditions have not changed much. The price of praseodymium and neodymium oxide fell back last week, especially as the previous high price began to fall. In terms of medium and heavy rare earths, products such as terbium and gadolinium are under pressure this week. 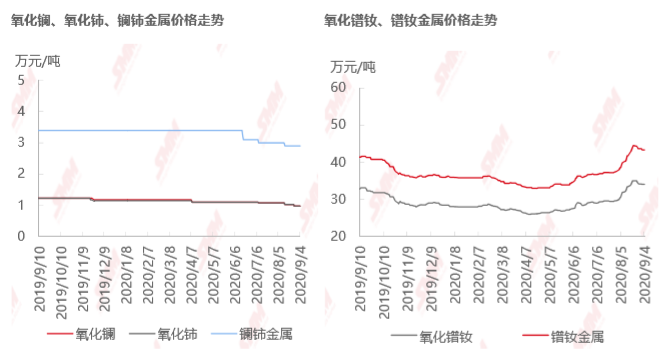 "apply for free to view the historical price of SMM