(1) the good market demand in China promotes the rise of the real price of metal products;

(3) the positive impact of the devaluation of the Brazilian real;

(4) the decrease of freight cost, but this positive effect is partly offset by the increase of C1 cash cost of iron ore powder.

Vale's actual CFR (cost and freight) / FOB (FOB) price is $88.9 / tonne, up $5.10 / tonne from the first quarter, mainly due to a rise in the reference price index for 62% grade iron ore, a higher forward price curve and a higher premium for Vale's low-aluminum products.

In the second quarter, the Brazilian real depreciated 21% month-on-month compared with the first quarter, resulting in a drop in the cash cost of iron ore powder C1 by US $1.7 per tonne. Nevertheless, the cash cost of iron ore powder C1 increased from US $16.2 / tonne in the first quarter to US $17.1 / tonne in the second quarter, mainly due to the factors foreseen in the first quarter report, such as the consumption of inventory with higher average production costs in the first quarter (US $1.1 / tonne) and the simultaneous increase in the volume and price of third-party purchases (US $0.7 / tonne). Expenditure related to operational safety measures taken by novel coronavirus (US $0.30 / tonne) and the impact of various one-time factors, such as an increase in demurrage (US $0.50 / tonne). Considering that full-year production is likely to be at the lower end of the guided production range and the current foreign exchange level, C1 cash cost in the second half of 2020 is expected to be close to US $14.5 / tonne. (please refer to the section "Ferrous Minerals" of the English version of the complete report for the composition and details of C1 cash costs. )

In the second quarter, the unit seaborne cost of iron ore fell by US $3.6 per tonne to US $13.5 per tonne, more than the expected decrease of US $3.0 per tonne, mainly due to the lower cost of marine fuel. Shipping costs in the third quarter of 2020 are likely to rise due to rising freight rates in the seasonal spot shipping market.

EBITDA of the nickel business was $243 million in the second quarter, down $107 million from $350 million in the first quarter, mainly due to reduced cost write-downs for by-products platinum group metals, particularly palladium and rhodium, and increased downtime costs related to maintenance at the (Voisey's Bay) mine in Vois Bay. However, these negative effects were partially offset by the liquidation of Vale's hedging position in nickel in March 2020 and the rise in real prices of copper, a by-product.

The EBITDA of copper business in the second quarter was $320 million, an increase of $160 million from $160 million in the previous quarter, mainly due to: (1) the increase in the real price of copper, which is due to the fact that the price of the London Metal Exchange tends to rise at the end of the quarter, and at the same time, bills based on temporary prices have been settled or repriced at a higher market value. (2) the devaluation of the Brazilian real has reduced the production costs of the Salobo (Salobo) plant and the Sossegu (Sossego) plant. In addition, thanks to the increase in by-product prices, the unit cash cost of the Salobo plant remained negative in the second quarter.

In the first six months of 2020, Vale generated a cost of US $112 million for the COVID-19 outbreak, of which US $85 million was spent on measures to combat the epidemic, such as donating rapid virus testing kits and personal protective equipment to the Brazilian federal and state governments, and providing support to a number of hospitals and local health departments; at the same time, operating costs increased by US $27 million.

(1) EBITDA rose in the second quarter;

These positive effects are partially offset by the following factors:

(II) following the update of the business plan and funding requirements of the Renoir Foundation (Renova Foundation) to meet its commitments, Vale has increased its allocation to the Foundation by US $566 million.

Free cash flow generated by Vale's operations in the second quarter of 2020 was $277 million, a decrease of $103 million compared to the first quarter, mainly due to the longer delivery cycle of CFR sales than FOB sales, so the strong performance of CFR sales in the second quarter (concentrated in June) required more working capital support. Vale expects free cash flow to improve significantly in the second half of 2020 as sales continue to grow and working capital gradually normalizes.

In July 2020, Vale issued a $1.5 billion bond maturing in 2030 with an annual coupon of 3.75%, the lowest yield of any 10-year bond issued by Vale, but was still nine times oversubscribed, marking Vale's successful return from international debt capital markets in February 2017. With liquidity from the bond issue, Vale plans to repay some of its revolving credit line loans in the third quarter of 2020. 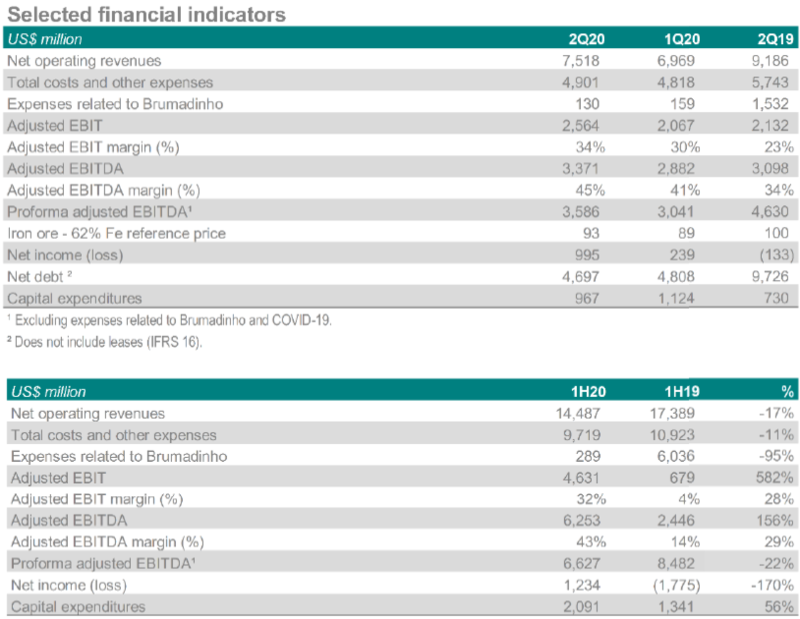 We are also promoting the decommissioning of other buildings in Brazil:

The Doutor and Campo Grande mine dams and three drainage risers are in the engineering stage.

The Pondes de Rejeitos Mine Dam of the basic metals business will be decommissioned in December 2020.

Other upstream projects, such as dams and dams, are in the process of decommissioning.

Major achievements to resume operations in the second quarter of 2020 include:

Safety measures taken to combat the epidemic have been strengthened, including minimizing the number of workers at work sites to maintain a safe social distance, implementing "test-follow-treatment" measures, large-scale testing of employees and isolation of employees who test positive and those who are in contact with confirmed cases.

In the south-eastern system, dry mineral processing operations in the (Timbopeba) mine of Timbo Peiba resumed production in June and are being converted to wet mineral processing operations following a temporary authorization from Brazil's National Mining Agency to dispose of tailings at the Thimbopeba pit. In addition, after reaching production in the first quarter, the Concei é san plant is using tailings filtration in the On ç an and Periquito mines to dispose of tailings as a short-term alternative to the closure of the Itabiru ç u dam.

In the southern system, the Dahuarren (Vargem Grande) integrated mining area implemented an alternative scheme, which partially solved the bottleneck of the mining area's logistics capacity, and used the Maravilhas No.1 Dam and Cianita waste dump as tailings disposal sites to restore part of the operation through tailings filtration. In the F á brica mining area, (TAS) at Shengshui Railway Station resumed operation after vibration tests, allowing inventory to be transported.

In the northern system, Vale received preliminary permission in June to expand the Dongling (Serra Leste) mine, which is the first step in the application process for the project. After that, Vale will be able to restore its production capacity of 6 million tons per year if it is licensed to install it.