SMM7 March 29: the author has been rolling in the industry of metal investment and global mining stocks for more than 10 years, witnessing the alternation of bear and bull cycles in many different metals. After the financial tsunami in 2009, the owner of the asset management company at that time felt that stocks had potential, so he set up an internal fund, and the author successfully persuaded me to be responsible for the investment trading and voice related to commodity stocks in the fund based on his successful prediction of the past global economic direction and his familiarity with commodities. In 2009, when the international silver price was about $12, the author bought gold and silver ETF as part of the cash in the fund. Because the silver ETF that the author bought at that time is a closed-end fund (Close End Fund), so the price will be different from the investment value (that is, the silver price). Until 2011, when the international silver price was ready to hit $50 (because the international silver price also peaked at $50 in 1980), we sold all the silver ETF held by the fund with 3 picks and 4 in one breath-and because the market mood was so optimistic at that time, closed-end funds had a 25% premium over the asset value of closed-end funds, so although the silver price reached $50, I sold for more than $60.

For a long time, the author thinks that it is relatively simple to predict the direction of silver price, because in history, the correlation between gold price and silver price is as high as 0.80. In other words, as long as the direction of gold price can be predicted successfully, the long-term trend of silver will not be too different. Unfortunately, gold prices officially peaked in 2012 (just as the Federal Reserve announced the introduction of QE3), and Western investment markets believed that the US economy was preparing for a recovery, so they began to sell safe-haven gold and buy stocks in 2013. At that time, the price of gold fell below 1500 US dollars, but Asian aunts were on the contrary actively absorbing gold. There was a famous saying that West Gold moved eastward in 2013, but most people were tied up after they bought gold that year. Fortunately, the bear market in precious metals was not long (2012-2015), and gold prices finally bottomed out in December 2015 when the Federal Reserve officially announced that it would raise interest rates for the first time since 2007.

By 2018 / 2019, gold prices rose inconspicuously as a result of the slowdown in the US economy, and Barrick must have judged that a golden bull market was coming before it would join Randgold in 2018. The development of the global epidemic this year has spurred a sharp rise in the price of gold like oil poured into the fire. There are two main reasons:

1. The epidemic has slowed or even shrunk global economic growth, which has led to a decline in the attractiveness of the stock market because of problems with corporate profits. Central banks around the world must print money to stimulate the economy, but the US Federal Reserve has said it will not raise interest rates until 2022, reflecting a greater view of the future economy than the market.

How fast does the Fed print money? Looking at the data released by the Federal Reserve, the balance sheet of the US central bank has soared by 80% in a little more than a year-of course, the money supply is only half the formula, depending on market demand for the dollar. But it is no wonder that the dollar has weakened recently due to the recent uncertainty in the US economy, which has led to a drop in demand for the dollar. 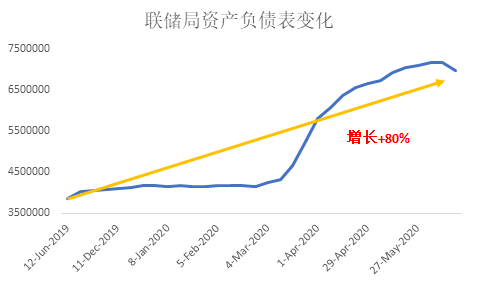 It is important to note that the balance sheet has actually shrunk in recent weeks, indicating that even now the Fed is not putting it unilaterally, but in and out. Then why on earth do you want to collect water? What will happen if the water is not collected? Similarly, the recent trend of US stocks has been somewhat volatile with the water collection meter. I think whenever the US stock market will face a larger decline, the Federal Reserve will release water again. Therefore, we should be careful that the short-term withdrawal of the Federal Reserve will lead to a short-term technical downturn in the stock market and precious metals.

two。 The world has entered the stage of the Cold War, just because of the impact of the epidemic, people still can not feel it, so the author judges that once the global epidemic improves, the global situation will rise sharply and significantly. In an environment of low economic growth and more unstable political situation in the future, what could be more stable than gold and silver investment (the point is that the most stable investment is not necessarily the one that will perform best)? However, according to observation, most Chinese people still seem to be unprepared for the evolution in this respect, as can be seen from China's gold quotation: 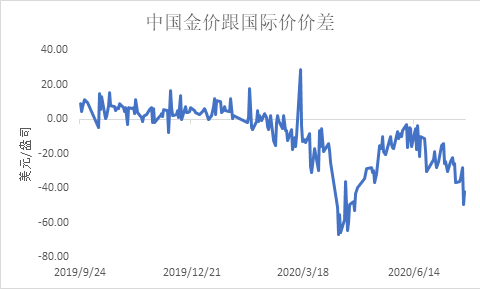 Since March this year, the price of gold in China has been lower than that of the international price, and the higher the international price, the greater the price gap in China, reflecting that many people think that the price of gold has risen so fast that they do not dare to buy it. For example, on July 27th, the spot gold price in the United States broke through the 2011 high and hit an all-time high, but on that day, the gold price in China was still below $1900, more than $40 lower than the spot price in the United States. But if you go to the future and know that the price of gold will be $3000 in two years, will you really not buy gold today? To put it bluntly, it is to judge the difference in the future price of a tool-13 years when the Western society dumped money to buy stocks; now the West grabbed gold (gold ETF holdings reached an all-time high in the first half of this year and increased by 743 tons, equivalent to 77% of China's demand for the whole year of 19 years!) However, the aunt is more enthusiastic about selling gold.

Therefore, I judge that Asian mothers will be the new force to buy precious metals in the future, from fear that the price of gold and silver is too high to enter the market for fear that they will miss more increases in the future.

On the other hand, another major force in the market that will stimulate the rise in gold and silver prices will be futures funds. Even though the price of gold has reached an all-time high and the price of silver has risen to a recent high, we will be surprised to find that most of this wave is driven by overseas physical investors. At present, the water level of US futures funds to be long gold and silver is still far below the all-time high! In other words, precious metals will rise sharply as more futures enter the market in the long run. (and note that the author believes that the net amount of gold and silver will reach a higher peak): Finally, money, like commodities, is a highly cyclical tool. The US exchange rate index began to weaken in 2017, which is likely to be the beginning of another cycle, and with the bad relations between the two countries, the market will also want to find non-dollar assets to spread the risk. Therefore, in this cycle, it is only a matter of time before the US exchange rate index falls below 90 points, and it may be difficult to preserve even 80 points in the long run.

Finally, commodity prices, including crude oil, have risen sharply recently, and if this continues, the world is bound to face high inflation, hyperinflation, or stagflation in the face of central banks' indiscriminate monetary efforts to pull the economy, either of which is good for gold prices. Therefore, by the end of 2022, the author estimates that the price of gold can rise to close to $3000. For silver, which is closely related to the price of gold, the ratio of gold to silver is about 32 times the last time the price of silver peaked in 2011. in other words, the gold price of $3,000 is equivalent to the price of silver of $94; even if the ratio is only 50 times at a discount, the price of silver is already $60. Of course, the risk is the sharp fluctuation of the price in the short term, and it is necessary to do a good job in risk management through the operation of futures with leverage.

ANZ Bank: Iron ore price to maintain at $70 per ton in early 2018, then fall back
Promoted by steel market, iron ore price is likely to keep firm during first several months in 2018, said ANZ Bank.