CST
data analysis
Source:SMM
SMM data showed that HRC stocks across social warehouses and steelmakers increased 2.3% in the week ended July 23 to 3.86 million mt, smaller than a 3.72% gain in the previous week.

SMM data showed that HRC stocks across social warehouses and steelmakers increased 2.3% in the week ended July 23 to 3.86 million mt, smaller than a 3.72% gain in the previous week. The stocks have risen for five consecutive weeks and were 12.78% higher than the same period last year.

Shanghai HRC futures extended their rally this week, with the most actively traded contract hitting a one-year peak of 3,844 yuan/mt on Thursday, and spot prices followed higher. 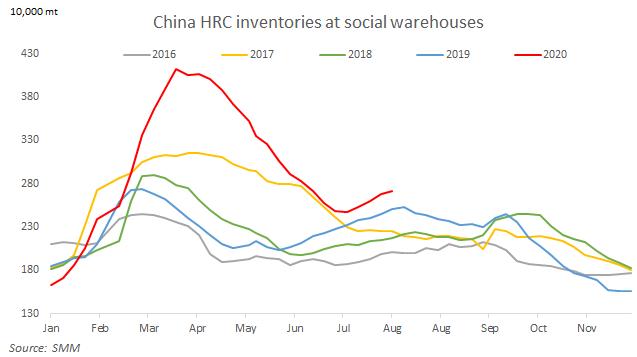 An increase in production also contributed to higher inventories at mills as rising profits lifted production enthusiasm among mills.

Recent increases in HRC inventories were not significant or swift enough to jitter mills or traders, as the macro environment remained positive. HRC spot prices are expected to continue to rise in the short term.

Greater inflow of seaborne steel billet to little impact spot steel prices in China
It is understood that about 60,000 mt of seaborne steel billet will enter China as steel prices in the international market kept declining amid the coronavirus impact. While this grew investors’ concerns that greater inflows of cheap materials could threaten domestic spot prices, the latest SMM survey suggests that the impact will be limited.