SMM7 March 23: 2020 is destined to be an extraordinary year. With the spread of the global epidemic, zinc prices once hit a new low of 14265 yuan / ton since mid-April 2016. Since the end of March, zinc prices have rebounded in the "V" shape, so in the context of the epidemic, what is the logic of the zinc market in the future? Li Daisheng, a senior analyst of the zinc industry of Shanghai Nonferrous net, gave the answer at the 15th lead and Zinc Summit in 2020 held by SMM. 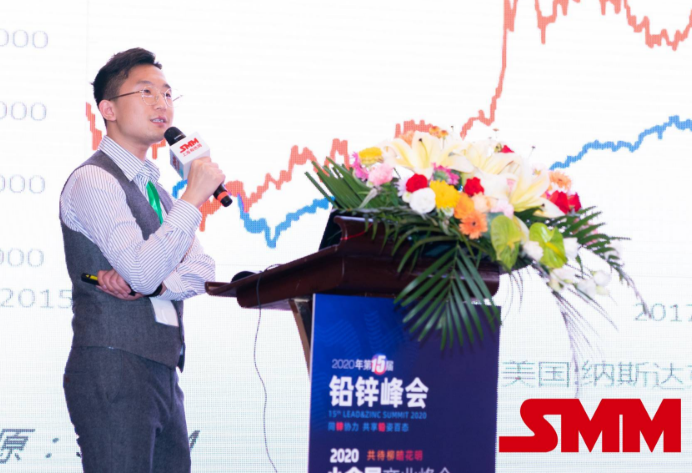 Li Daisheng said that compared with lead, zinc prices are found to be positively correlated with inventory changes in the long term, which is different from the traditional judgment of long-term supply and demand and then price forecasts. At this time, we need to find out what the market contradiction is, and why did zinc prices still meet market expectations and fall rapidly in the context of continuous destocking last year? From the fundamental point of view, starting from April 2019, with the breakthrough of the bottleneck of refined zinc production, from the point of view of supply and demand, the mainstream balance sheet has a large surplus in the near and long term, and zinc has become the preferred variety for short sellers. From a macro point of view, zinc long-cycle fundamentals are expected to be short, and when mainstream market funds choose to hedge against the global macroeconomic recession, zinc naturally becomes the first long-hedged variety in non-ferrous metals.

Due to the impact of the epidemic led to the collapse of overseas zinc consumption, but the global zinc supply is still excess, after the recovery of epidemic consumption superimposed by the release of global currency, zinc may continue to be revised up.

The extent of oversupply at the end of overseas mines has been tightened due to the successive reduction of production in overseas mines.

Due to the continuous fermentation of the overseas epidemic situation, Peru and other countries launched the national closure policy, and the mines issued announcements to stop production one after another. For example, Peru's mineral reduction is 219400 tons; Mexico's mineral reduction is 76800 tons. The epidemic has not only had an impact on the production of mines in operation, but also led to the postponement of production plans for some new production capacity in 2020, and it is estimated that the new production capacity of overseas mines will be 328000 tons in 2020. The main increase in production is concentrated in Nexa mines.

According to data, Mexico, Peru, Bolivia, Canada and Namibia imported 993700 tons of zinc concentrate in 2019. The epidemic led to the suspension of production in overseas mines, affecting at least 38-400000 metal tons. The import of zinc concentrate reached an all-time high in April this year, mainly because on the one hand, the epidemic led to the suspension of work by mining enterprises in Peru and Mexico, and the concentrated delivery of zinc mines in Hong Kong. On the other hand, the supply of zinc concentrate is expected to be tight, resulting in domestic mining trade and smelting enterprises to increase temporary procurement. 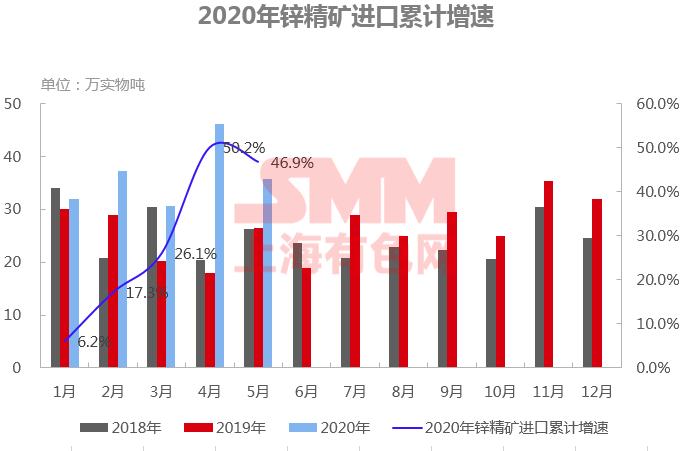 Reasons for mine production reduction and shutdown: 1. High altitude areas, such as Tibet, Xinjiang, and Inner Mongolia, have seasonally stopped production and due to the superimposed zinc price of the epidemic, some mines have delayed resuming production, accounting for about 15% of the total regional production capacity, and have gradually recovered from the end of April to May.

2. As a result of the epidemic, the resumption of work in the mine was delayed in varying degrees. For example, some mines in Yunnan have not resumed production due to the epidemic situation, while others have decided to stop production because of production losses. It accounts for about 6% of the region's total production capacity and 8%, and has been restored one after another in May.

3. Environmental protection, funds and other factors stop production for a long time.

4. Concentrate production loss, there is a reduction in production, but mostly only production rather than sales.

The low inventory of raw materials in zinc refineries leads to the reduction of domestic processing fees.

Historically, large-scale production reduction of zinc occurred in 2008 and 2015, and what they have in common is that zinc prices have fallen on a large scale, and domestic and foreign zinc concentrate enterprises have reduced production to deal with it. What is slightly different is that the price is highly correlated with domestic TC in 2008, while the price leading processing fee fell by about 6 months in 2015. At present, only 5% of domestic zinc mines lose money. Because domestic mines need to consider the early investment cost before reducing production, such as exploration right price and mining right price, and some state-owned enterprises and mines in order to protect employment, production and other factors, even if the price loss is serious, it will not easily reduce production.

SMM believes that overseas mines continue to resume production and delivery, Q3~Q4 domestic overall ore supply tends to be loose, domestic and imported zinc concentrate processing fees may further rise. Under the profit revision forecast, the domestic refined zinc output showed a positive growth in the second half of the year compared with the previous year. At present, the integration of production in domestic zinc refineries has become a trend, and attention will be paid to the proportion of alloy production in refineries in the future.

While the impact on overseas refined zinc is relatively small, the impact is mainly concentrated on the 50 per cent operating rate of Cajamarquilla owned by Nexa, the brief shutdown of the HZL smelter for 2-3 weeks and the shutdown of the Skorpion smelter. Entering the second half of the year, the main increments are concentrated in the resumption of production of AZR and the expansion of production of Pernol Penoles.

Galvanizing enterprises are mainly concentrated in North China, and inventory in Tianjin is positively related to fixed asset investment in capital construction for a long time. The epidemic led to the collapse of domestic consumption in 2020, galvanizing consumption has a strong toughness, mainly supported by domestic infrastructure projects. According to the breakdown of domestic high-frequency data, excavator sales and housing construction area in the first half of the year were in the doldrums. At the end of the second quarter, with the success of domestic epidemic prevention and control, various high-frequency indicators began to show signs of stabilizing. If the automobile production and sales data are slightly repaired, the domestic demand for the three major household appliances has a strong toughness, but the operating rate of semi-steel tires is still low.

Export orders for die-casting alloys and end products are in the doldrums, dragging down zinc consumption in Guangdong.

The low prosperity of the zinc oxide industry is still affected by the continued downturn in automobile production and sales, and the profits of the industry are not high. It is currently in the stage of recovery after the epidemic.

The QR code in the scan picture applies to join the SMM industry communication group.