In the past week, there has been a lot of rain, which has led to the high water level of the Yangtze River. as a result, some docks along the line have been sealed, the transportation of raw materials and finished materials have been affected to a certain extent, and some steel mills have carried out maintenance of blast furnaces. In addition, on July 20, the Tangshan Municipal Government issued the notice on further tightening Control measures, requiring that on the basis of the management and control measures in July, due to the poor air quality from July 19 to 24, steel enterprises were suspended and limited production in different degrees from 16:00 on the 19th to 16:00 on the 24th, which once again triggered the expectation of environmental hype. In terms of demand, the General Office of the State Council issued the requirements of the "guidance on comprehensively promoting the Transformation of Old Urban Residential areas," which clearly defines the task of renovating old urban residential areas, focusing on the transformation of old urban residential areas built before the end of 2000. This year, various localities plan to renovate 39000 old urban residential areas, double that of last year, and raise the expectation of an increase in steel demand; at the same time, after the flood, there is a need for post-disaster reconstruction. The relationship between supply and demand has improved significantly, and the domestic financial market has rebounded sharply after a sharp fall in the previous few days, boosting market sentiment. It is expected that in the short term, due to the positive macro aspects and improved fundamentals, the market is expected to run strongly, but we need to be aware of the risk of rising and falling caused by the negative short-term news and the rapid rise of the disk. 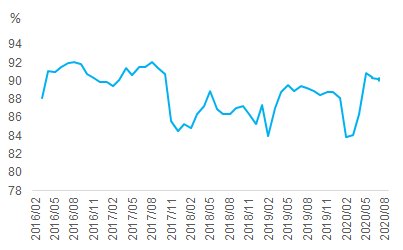 Steel plant A (East China): affected by the flood, the transportation of raw materials and finished materials is limited, and the production has been suspended recently.

Steel plant B (East China): affected by the flood, the transportation of raw materials is difficult, and the factory takes advantage of the opportunity to refine the furnace.

Steel mill C (Huazhong): there is no impact at present. The blast furnace starts normally and is cautiously optimistic about the future.

Steel works D (Northeast): although the blast furnace has maintained its normal production state recently, the rolling line has been overhauled.

Steel plant E (South China): maintain full production, there is no maintenance plan for the time being.

SMM Research on Operating Rate of Copper-end Enterprises
As per SMM research data, operating rate of cable enterprises is 86.97%, dropping 1.16% on yearly basis, up 0.28% on monthly basis.