In the second quarter of 2020, Vale iron ore powder production was 67.6 million tons, of which monthly production in June exceeded 25 million tons, showing a strong increase from April and May levels, due to the arrival of seasonal high production periods as rainfall decreased. The production and operation rate of S11D reached the level of 91 million tons per year in June and is likely to increase in the second half of the year, with annual production expected to be slightly more than 85 million tons.

Vale's guided production of iron ore powder will remain unchanged at 310 million to 330 million tons in 2020, and it is most likely to reach the lower limit of this range.

Finished nickel production reached 59400 tons in the second quarter of 2020, mainly due to: (I) the strong performance of refineries in the North Atlantic system; (II) increased production at the Matsuzaka plant in Japan and plants in Indonesia following routine maintenance in the first quarter, but lower production at the (Clydach) plant in the United Kingdom due to a decrease in raw material ore from Indonesian mines; and (III) an increase in production at the plant in New Caledonia. Nickel production, excluding New Caledonia plants, reached 94200 tons in the first half of 2020, and should reach a guided output of 180000 to 195000 tons for the whole year.

Copper production in the second quarter of 2020 was 84500 tons, a decrease from previous quarters, mainly due to the impact of the new crown pneumonia outbreak. Copper production in the first half of 2020 will be 179000 tons, and the full year will also reach a planned target of 360000 to 380000 tons, and with the end of the rainy season in Brazil and the resumption of production at the (Voisey's Bay) mine in Vois Bay, the South Atlantic system is expected to achieve stronger operating results in the second half of the year. 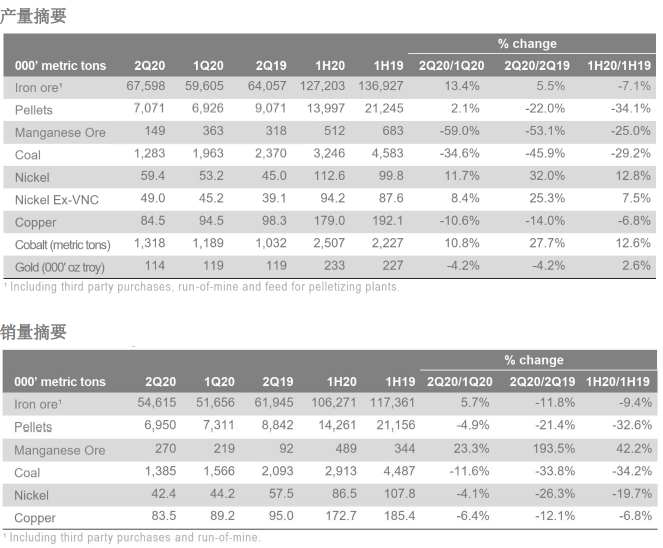