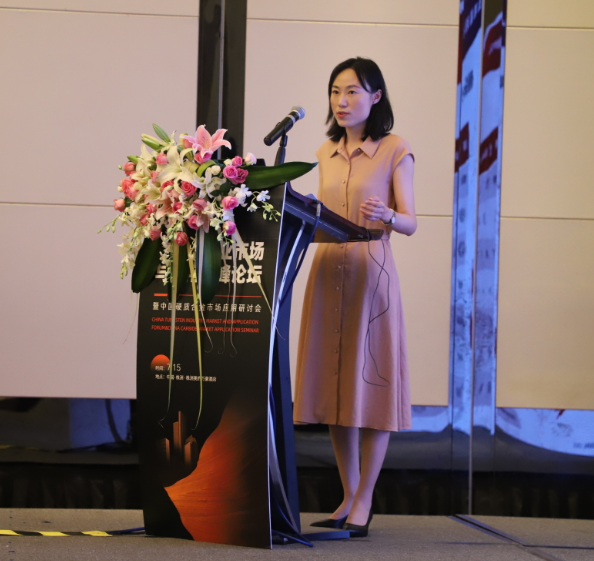 The most typical tungsten mines in Canada are Cantung and Mactung, but due to environmental and traffic reasons, the operating cost of Cantung tungsten mine is too high and there is basically no profit, so production has been suspended since 2016. Mactung tungsten mine also shelved development again in 2016.

Excluding the three countries mentioned above, China, Canada and Russia, the remaining 20% of the world's tungsten resources are scattered in Vietnam, Spain, the United Kingdom, North Korea and other countries. 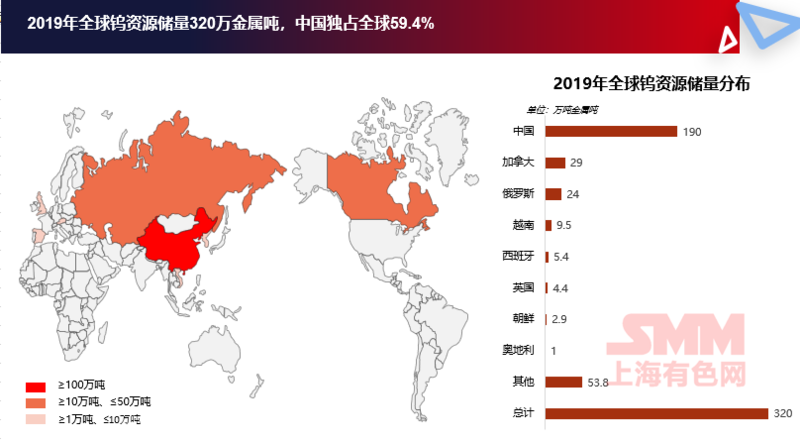 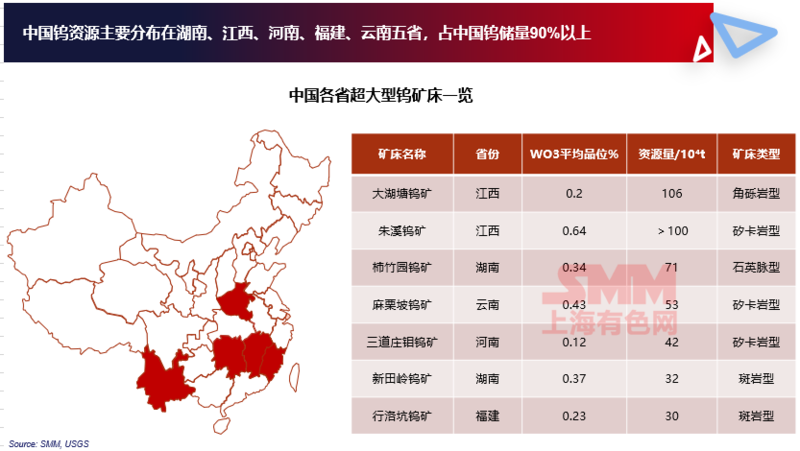 The slight decline in output in 2018 is mainly due to several reasons: first of all, in that year, with the strengthening of safety supervision, environmental protection, and resources, some tungsten mines stopped production and some trading enterprises of mineral products stopped production or changed industries. Second, with the regulatory authorities stepping up the verification of resource exploitation in the past two years, the phenomenon of overmining in areas such as Jiangxi and Hunan has been effectively alleviated, and the overmining rate has dropped significantly; and we know that the overmining rate of domestic tungsten resources may be close to 50% in 2017.

Compared with 18 years, the situation in 19 years tends to be stable, and the total output of tungsten concentrate is about 140000 tons. At the symposium of the China Tungsten Association in May 2019, the eight major domestic tungsten enterprises agreed to reduce production to a certain extent in order to jointly maintain the supply order of the tungsten raw material market.

2020, as we all know, is a very special year. Affected by the epidemic of Xinguan pneumonia, the production of tungsten concentrate in China decreased greatly in the first half of the year, especially in the first quarter of this year. Combined with the situation for the whole year, we think that the total output this year will drop by about 15% compared with the same period last year.

In the following two years, 2021 and 2022, mine production and downstream demand will gradually recover. However, due to domestic policy control, resource endowment, mining cost, safety and environmental protection and other problems, the output of the main tungsten mine is difficult to achieve great growth in the future. So the growth rate in the past two years will be about 10%. In 2019, China's tungsten concentrate production accounts for more than 80% of the world's total output. In addition, the main producing countries are Vietnam, Mongolia, Russia and so on.

Global distribution of tungsten concentrates in 2019 From January to May 2020, China imported 191 tons of tungsten concentrate, a sharp decrease of 84% compared with the same period last year. Of course, we can understand that it is affected by epidemic factors. 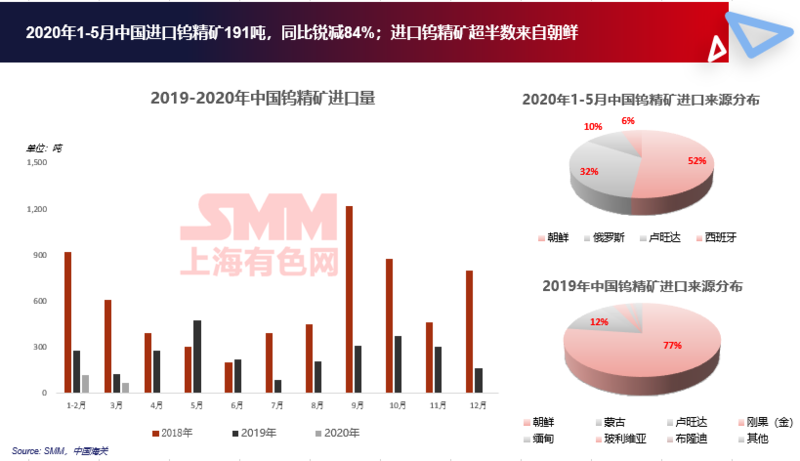 The situation this year is of course grim. Demand at home and abroad has shrunk sharply, and the growth rate of cemented carbide production is bound to decline, and will gradually recover with the gradual relief of the epidemic and cost support. 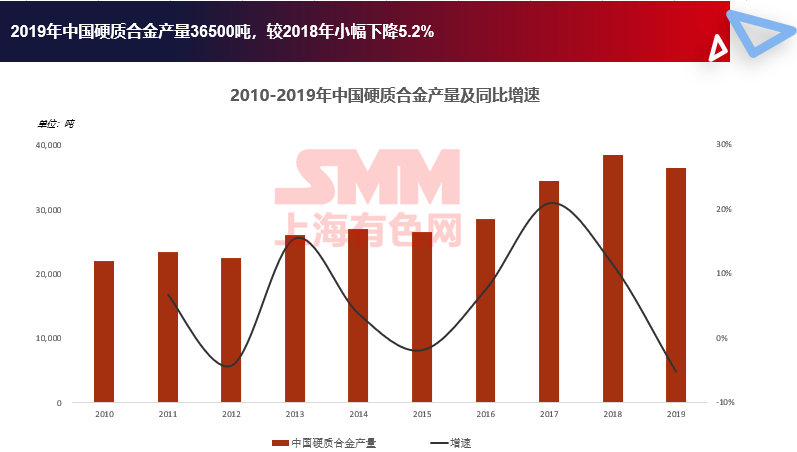 Export of Tungsten products in China 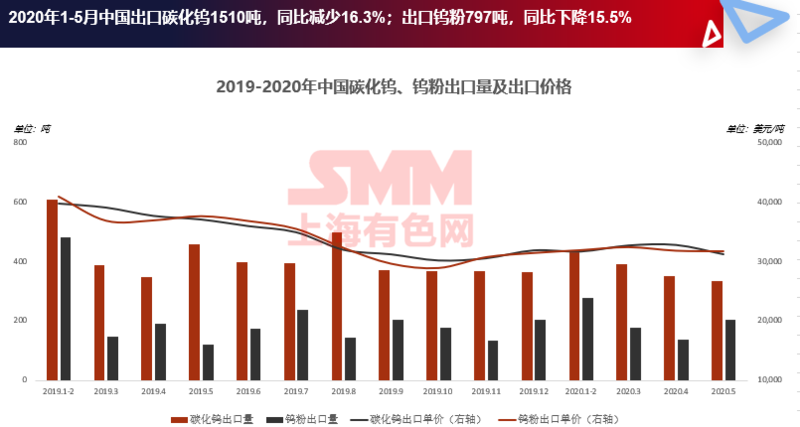 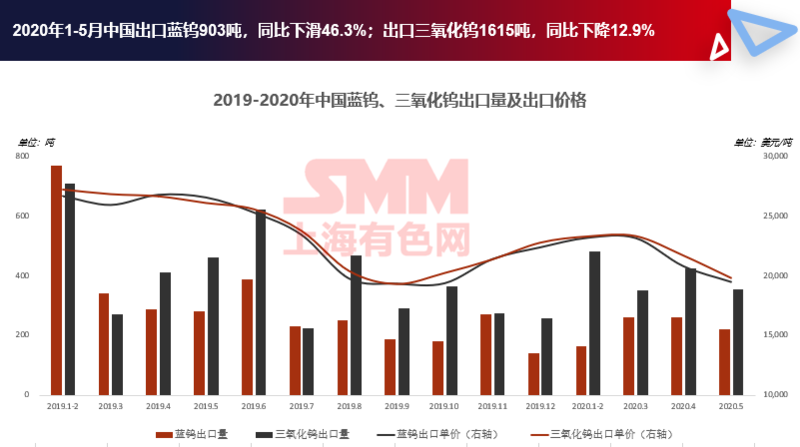 Above, we reviewed the domestic export of tungsten products from last year to this year. It can be seen that no matter what kind of products are affected by the epidemic to varying degrees this year, the export volume has been reduced, which is a test of our domestic tungsten consumption capacity. According to the National Bureau of Statistics, the official manufacturing PMI in June this year was 50.9%, up 0.3% from the previous value, and remained above the rise and fall line for four consecutive months, that is, above the dotted line on the left. This shows that China's economy continues to improve. Judging from the sub-index, the production index rose 0.9 percentage points to 53.9%, and the new orders index rebounded 0.5 percentage points to 51.4%, indicating that demand is gradually recovering. New export orders 42.6, up 7.3 percentage points from the previous value, rebounded by a large extent. On the one hand, the expectation of a rebound in external demand brought about by the resumption of work in Europe may have increased, but on the other hand, it is still significantly lower than the rise and fall line.

Purchasing Manager Index of China's Manufacturing Industry from 2019 to 2020 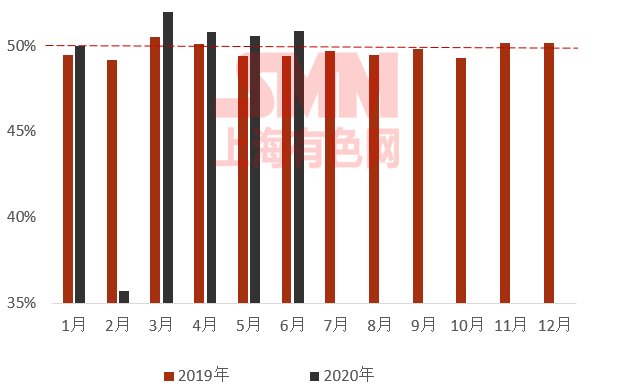 Also according to the statistics of the Bureau of Statistics, the added value of industries above scale increased by 4.4% in May 2020 compared with the same period last year, 0.5 percentage point faster than the previous month, and continued to pick up on the basis of turning negative to positive in April. From the picture, we can see that from last year to this year, only the January-February data of this year is negative, which is the most serious period of the epidemic in our country. Generally speaking, fiscal policy will be gradually launched in the second half of the year, special treasury bonds will be launched, the issuance of special bonds will be accelerated, and infrastructure support is expected to continue to strengthen to boost investment demand. In terms of risks, overseas demand is still facing uncertainty. On the one hand, Sino-US relations are on the one hand. The epidemic in the United States has not yet stabilized and rebounded. The number of new cases in a single day has reached a record high, and the uncertainty is strong, which is expected to have a certain impact on external demand. Export-oriented enterprises will still be under pressure.

Today is the 15th, and the annual rate of China's second-quarter GDP will be released tomorrow, July 16. This value was-6.8% in the first quarter. At present, almost all institutions predict that China's GDP will return to positive growth in the second quarter.

In May 2019, ten enterprises of the presidium of the China Tungsten Association agreed to jointly maintain the supply order of the tungsten raw material market and reduce the output of tungsten concentrate by no less than 10% in 2019.

In December 2019, the tariff Commission of the State Council: from January 1, 2020, the provisional import rates of tungsten scrap and niobium scrap will be abolished, and the most-favored-nation tax rate will be resumed; the Ministry of Commerce announced the list of state-owned enterprises exporting tungsten and tungsten products in 202021, with a total of 16 enterprises.

In May 2020, Ganzhou City put forward and drafted the "Code for the Construction of Green Tungsten Mine" jointly with the Zhengzhou Research Institute of the Chinese Academy of Sciences, which will be implemented from May 1, 2020; Minister of Ecology and Environment: the second round of central environmental protection inspectors will be launched this year.

Affected by the abolition of export quotas and tariffs from 2014 to 2015, tungsten prices fell to the cost line. Then, after the combined influence of industry self-discipline from 2016 to 2017, enterprise production limit quotation, national collection and storage, and environmental protection supervision, the price of tungsten concentrate regained its position of 100000 yuan / ton in 17 years.

In 2018, the overall tungsten price level is high, the enthusiasm of enterprises to start work is high, and the production capacity of APT is released massively; but at the same time, the consumption capacity of the back-end is still weak, and trade frictions between China and the United States also begin to affect exports, so many factors are superimposed. The domestic tungsten market in 2019 is in a state of significant surplus. Prices continue to fall, smelters hang upside down under great pressure, the capital side of the industry is tight, and it is difficult for tungsten enterprises to survive. So in May, the leading tungsten concentrate enterprises decided to reduce production by no less than 10%, and 17 smelters in Ganzhou also jointly proposed to limit production and stop production. In September, after the pan-sub-tungsten product inventory auction, the greatest uncertainty to suppress the rise in tungsten prices was eliminated, and tungsten prices began to pick up.

We believe that after repeatedly bottoming out prices in June, prices accumulated upward momentum in July, and with the recovery of consumption in downstream areas such as cemented carbide, the whole will fluctuate upward in a certain space in the second half of the year. The mainstream operating space of tungsten concentrate is between 80-90 thousand yuan / ton, and the main operating space of APT is between 12-140000 yuan / ton. 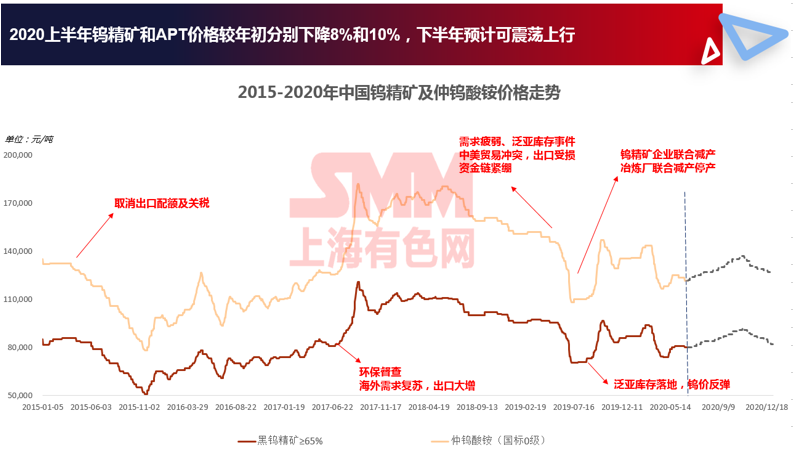