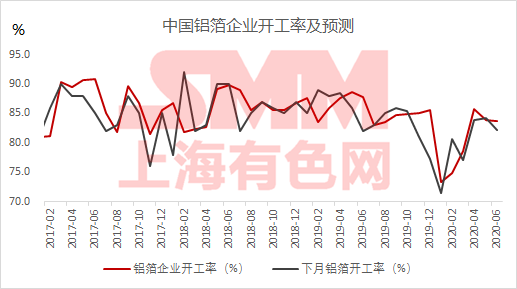 According to feedback from aluminum foil enterprises, orders for products such as air conditioning foil, food packaging foil and beer sealing foil performed well in June. Due to the gradual hot weather, the market demand for beer beverages and air conditioners increased, and related foil orders increased. Feedback from products such as tobacco foil, drug foil and electronic foil was mediocre. Although drug foil orders were popular from April to June, with the remarkable results of strict control of the epidemic in China, the heat of drug foil gradually receded. In addition, Orders for brazing foil remain constrained by the weak auto market. Because the large aluminum foil enterprises in Jiangsu and Henan account for a large proportion of air conditioning foil and food foil in the product structure, the market demand for related products is good, which drives the operating rate of the entire aluminum foil industry to remain strong. In terms of foreign trade, due to the diversification of aluminum foil exporting countries, most enterprises say that export foreign orders have not been greatly affected, but recently the Shanghai-Lun ratio has risen, and export orders have reduced their profit margins to a certain extent if they are denominated in US dollars. in addition, some enterprises expressed India's concern about the recent anti-dumping investigation of Chinese aluminum foil.

With regard to the aluminum foil market in July, enterprises reported that air conditioning foil and soft food foil are still hot, and it is expected that the overall operating rate will not decline too much, but the overall number of new orders may be slightly lower than that in June. (SMM Xu Man 021 Mel 51595898)