SMM7 March 13: today's futures market is warm, the metal market generally rose, iron ore rose more than 5% in intraday trading, and the intraday futures price reached 837 yuan / ton, a new high in nearly a year. It is expected that there may be a reduction in supply in the near future in the major iron ore supplying countries. 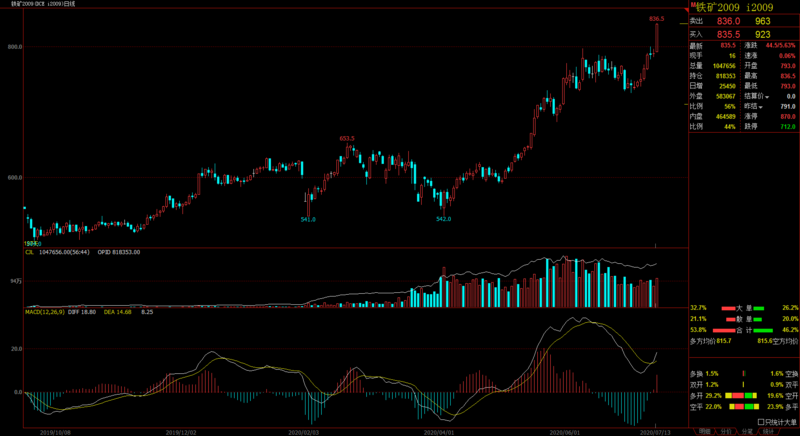 The epidemic situation at the supply side of foreign mines has continued to ferment. According to data released by the Brazilian Ministry of Health at 19:00 local time on the 11th, there were 39023 confirmed cases of new crown pneumonia in Brazil within 24 hours, with a total of 1839850 confirmed cases and 71469 deaths. So far, the cumulative number of confirmed cases and epidemic deaths in Brazil rank second in the world, second only to the United States. And the news of the Brazilian president's confirmation has added to the market's concern about the local epidemic. Even if the president of the Brazilian mining association (Ibram) said that Brazil has the ability to meet the growing demand for iron ore, there is no risk of closing the mine as a result of the new crown outbreak. But before that, Ibram expected to produce 450 million tons in 2020. The association now expects production of between 400m and 420 million tonnes. In addition, iron ore shipments from Australia are expected to decline seasonally after the end of the fiscal year for large Australian miners in June.

On the demand side, according to SMM, although the early Tangshan production restriction documents are strict, but the actual implementation is lower than expected, the current period of Tangshan port dredging volume still maintained an increasing trend, with an average of nearly 340000 tons per day. With the recent increase in arrival and the relief of superimposed pressure on the port, the inventory of the two ports in Tangshan increased slightly compared with the previous month. The recent arrivals of Qingdao and Rizhao ports have dropped by 24% month-on-month, and the overall steady increase in superposition and thinning of ports has led to an upward trend in the price of imported minerals in Shandong. However, it is worth noting that, in view of the recent rapid rise in iron ore prices, steel mills mainly purchase on demand, short-term sparse port or difficult to see a substantial increase.