CST
translation
Source:SMM
According to the SMM survey in June, the operating rate of the metal and silicon industry was 37.5%, an increase of 1.5% from the previous month and 3.1% from the same period last year.

SMM7 March 13: the operating rate of the metal silicon industry surveyed by SMM in June was 37.5%, an increase of 1.5% from the previous month and 3.1% from the same period last year. 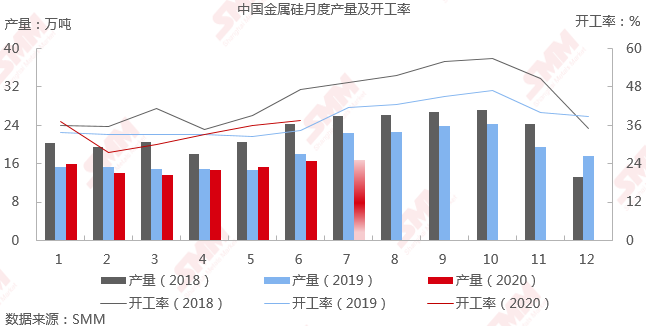 The month-on-month increase in operating rate is caused by the increase of silicon plants after the advent of the flood season in southwest China, but the expected increase in production is weakened by the reduction of production in Xinjiang, Guangxi, Chongqing, Fujian and other producing areas. Last year, Sichuan and Yunnan generally started work late due to drought, and the opening time of the silicon plant earlier in the flood season this year was also earlier than the same period last year. In addition, the increase in the concentration of domestic metal silicon production capacity after the withdrawal of backward production capacity was also an important reason for the increase in the operating rate compared with the same period last year, so it showed that the operating rate increased while the output decreased.

The number of furnaces opened in Yunnan and Sichuan provinces basically reached the highest level in the flood season. Due to power supply restrictions, the production of Nujiang River in Yunnan Province began to be reduced in early July. The number of furnaces in the state decreased by about 60% for more than 10 days, and the output in July decreased by about 6500 tons compared with the previous month. Supply is expected to return to normal in August.

A few large factories in Xinjiang, another major producing area, unexpectedly stopped production in early June, reducing output by more than 8000 tons month-on-month. Medium-sized factories in Yili have also reduced production due to losses, with the operating rate of the autonomous region falling to 24.27% in June. The above-mentioned large factories are scheduled to resume production by July 12, with an estimated output of 7,000 Mel 8,000 tons in July.

The implementation time of Fujian preferential electricity price ended in June, and after canceling the discount, Fujian electricity price rose to around 0.56 yuan / kWh, and only one silicon factory in the province is still in production. If there are no new preferential policies in the future, it will be very difficult for Fujian Silicon Plant to survive in the current market conditions.

In June, some production capacity in Guangxi, Chongqing, Hunan and other regions was shut down due to losses, and some silicon plants in the north, Inner Mongolia and other places delayed to resume work after the completion of maintenance, saying that the current market price could not be profitable. The operating rate of silicon companies in these areas is not expected to recover significantly in the third quarter. The national start-up increment from July to August is mainly reflected in the complete release of the resumption of production capacity in southwest China and the increase in the operating rate of large factories in Xinjiang. Due to the parallel increase and reduction of production, the national operating rate is expected to change little month-on-month in July.

If you want to know more detailed market information and market trends, or have other information needs, please dial 021mur51666895, contact: Ms. Yang.