CST
translation
Source:SMM
According to a survey conducted by SMM, the operating rate of aluminum profile enterprises was around 63.33% in June, up 0.03% from May. 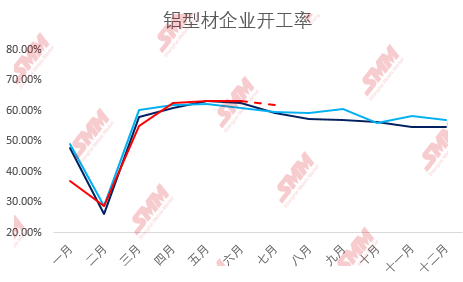 First of all, in June, the overall operating rate of profile enterprises maintained stability, the operating rate of large enterprises increased slightly, and the demand of construction profile enterprises was strong, both of which continued to support the overall start-up of profile enterprises. Secondly, the differentiation of the operating rate of enterprises of different sizes intensified, the start-up of large enterprises increased year-on-year / month-on-month, while the start-up of small and medium-sized enterprises declined but increased compared with the same period last year, and the decline of small enterprises was even greater. The orders of large enterprises are still full in June, and some enterprises even choose high-quality orders to receive, with an average production schedule of 20 murals and 30 days, with more actual orders to be produced; some medium-sized enterprises perform well by virtue of the competitiveness of certain large orders or advantageous areas; orders for small enterprises begin to decline after reaching their peak in April and May, and their expectations for July and August are not very optimistic. In addition, under the expectation of the large completion cycle, orders for building profiles in real estate and infrastructure-related aspects are relatively abundant, aluminum formwork orders are also strong, and industrial profile enterprise orders are mostly concentrated in automotive, container, rail transit, photovoltaic and other fields. In addition, customs data show that China's profile exports decreased by more than 30% in May compared with the same period last year, and also dropped by 6.15% from the previous month. The second outbreak of overseas outbreaks continued to affect exports, except that a few enterprises responded to exports from some countries and regions. The overall export volume decreased significantly compared with last year.

Raw material inventory fell 0.78% from May, around 17.66%, continued to adjust slightly, affected by rising aluminum prices, downstream processing enterprises more to digest the previous inventory, in addition to the signed long order raw materials, more bulk purchases just need to be replenished according to new orders, and the demand of small and medium-sized enterprises with obvious weakening of some orders has also declined slightly. The inventory of finished products has increased by 1.39% compared with May. Around 29.45%, the customer groups of enterprises are different, and the normal inventory level is also different. The slight increase in the inventory ratio of finished products is affected by the increase in production capacity of enterprises, the inactivity of customers in picking up goods, the lack of shipping capacity, and so on.

Under the influence of the summer off-season, the start-up of small and medium-sized enterprises will continue to decline, the production capacity of some large enterprises has increased, and the product structure has been adjusted, which will have a certain impact on the start-up rate in the short term. But overall, there is little room for a reduction in the expected operating rate of profiles in July, which is expected to be about 62%.