In terms of enterprise scale, the operating rate of large plate and strip enterprises remained at a high level of more than 70% in June, which was basically stable compared with May, while the operating rate of small and medium-sized enterprises fell significantly due to the reduction of orders. In terms of product structure, the stamina of building plates and decorative strips was not good enough in June, and the increase in orders of 3C electronic materials and medical enterprises was not as good as that of the previous month. Automobile plates have not yet shown significant signs of warming up. Cans orders remain hot compared with the previous month. Large enterprises in the industry, such as Henan Zhongfu, Shandong Nanshan and Shandong Hongchuang, said that their own orders were scheduled for 1 month and 2 months. Orders are relatively full, and after entering the summer, the demand for foreign canned materials has also increased, and the export environment has improved. However, in terms of the overall export of aluminum plate and strip, the state of export hindrance in June has not been completely reversed. The General Administration of Customs announced that the export volume of China's aluminum plate and strip in May was 192200 tons, a decrease of 14.33% from the previous month and 21.63% from the same period last year. According to the feedback from downstream manufacturers, it is difficult to expect a sharp rebound in exports in June. 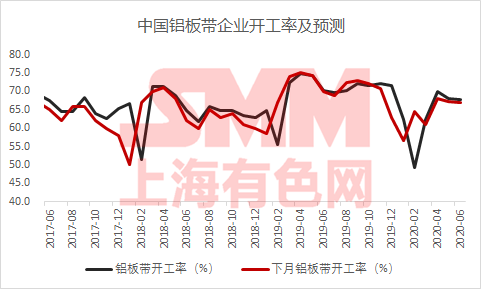 In terms of the situation in July, enterprises in the industry said that their new orders had shown a clear weakening trend in late June. Although the operating rate of that month remained stable, it was more due to the delay effect of orders received in May. As far as the current June order receiving situation is concerned, the overall production schedule in July is shortened, and the operating rate will fall further, but considering that orders from large strip enterprises are relatively stable, it may support a sharp decline in the overall operating rate in July. (SMM Xu Man)