CST
translation
Source:SMM
Ignoring the fundamentals, hot money poured into Shanghai and zinc soared by about 4% in two days! The trend of zinc price depends on the choice of funds. boosted by macro optimism, hot money continues to pour into the market and is wary of the situation in China and the United States and the tightening of domestic monetary policy in the future. But the fundamentals are empty and it is recommended to wait and see. 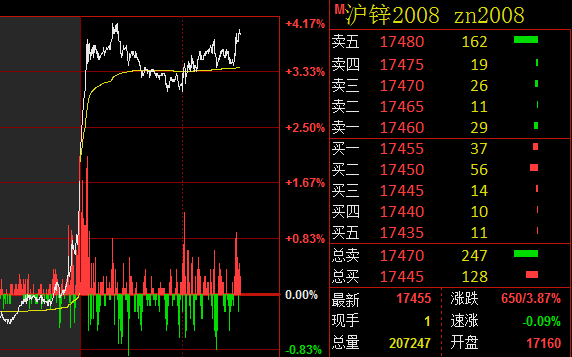 SMM believes that the strong pull of Shanghai zinc is mainly due to macro and financial disturbances, which has little to do with fundamentals.

From a macro point of view, A-shares have performed well recently, with international commodity prices picking up in June, domestic manufacturing recovering steadily and market demand continuing to improve. According to the Bureau of Statistics, PPI rose 0.4 per cent in June from a drop of 0.4 per cent last month. The macro mood is good, but the epidemic situation in the United States is still serious, and the uncertain factors are large.

At present, the consumption of zinc downstream is in the off-season, and there is no bright performance on the consumer side. As for galvanizing, due to the recent rainy season affecting the start of some projects, galvanized pipe terminal orders are lower than before. In terms of structural components, due to the recovery of the epidemic, the iron tower project is basically based on the rush order of last year's project, and many bidding projects have not yet started this year, resulting in a gap in the middle. At present, the tower order is weak. Due to the influence of overseas epidemic situation, external demand orders for die-casting zinc alloy and zinc oxide plates have not improved.

Taken together, the trend of zinc prices depends on the choice of funds, boosted by macro optimism, hot money continues to pour into the market, vigilant against the situation in China and the United States and tightening domestic monetary policy in the future. But the fundamentals are empty and it is recommended to wait and see.

[SMM Analysis] what is the story of zinc's strong breakthrough through the Qiqi pass and the macro-promotion of external fundamentals?

Jin Rui Futures Zeng Tong: yesterday, overseas zinc mines resumed production and regeneration twists and turns, not only transport problems, on the other hand, the resurgence of the new crown epidemic in the mine made the market worried about the pace of zinc mine recovery, raising market expectations of a complete reversal of the zinc balance. From the point of view of the overnight rise of zinc, from the point of view of the mid-cycle, the zinc metal link was cashed in the first half of the year, and the global market pattern was only slightly surplus in the second half of the year. From this point of view, the contradiction between supply and demand pattern of zinc market is not strong. It is expected that the core operating area of zinc price in the near future will be around US $1,350 per ton. From the side observation of infrastructure, no matter the approval of funds or the number of projects have maintained a relatively good pace, zinc consumption in the second half of the year will maintain the current growth level under the support of infrastructure; on the supply side, through the survey of domestic refinery production in the third quarter, it is found that Q3 smelting output may be less than market expectations, or keep the zinc market at a stable de-stocking level in the third quarter, thus laying the groundwork for import demand after the return of the consumption season.