In May, the consumption of scrap copper at the processing end rebounded obviously. Benefiting from the continued rise in copper prices, the price gap of fine waste further widened to around 1,000 yuan in May, and the consumption advantage of scrap copper gradually became apparent. In May, the operating rate of the scrap copper rod industry increased significantly by 15.47% to 43.63% from the previous month, and is expected to rise to more than 55% in June. At the same time, the domestic supply of scrap copper is also relatively increasing. On the one hand, the price of copper has gradually risen to the psychological level of traders' shipping, and the rebound in profits has led to an increase in the market's willingness to ship goods. On the other hand, as the momentum of the rise in copper prices in May was weaker than that in the previous period, domestic scrap traders were more willing to cash in shipments because they were worried about the risk of fluctuations in copper prices, and the loss stocks hoarded before the Spring Festival were also further released, resulting in a sharp month-on-month increase in domestic scrap copper consumption in May. In addition, scrap copper from Malaysia began to arrive one after another, and the supply and demand of domestic scrap copper improved at the same time.

The increase in scrap copper consumption in smelters is limited, and the arrival of imported scrap copper in May is still not abundant. China imported 69500 tons of copper scrap in May, down 15.8 per cent from a month earlier and down more than 60 per cent from a year earlier, according to customs data. From January to May, China imported a total of 351900 tons of scrap copper, a decrease of 47.71 percent over the same period last year, a decrease of about 330000 physical tons, or about 250000 metal tons. The import of scrap copper was obviously affected by the overseas epidemic situation in the first half of the year, which limited the recovery of the operating rate of refineries. Due to the substantial reduction of imported scrap copper, the domestic scrap copper supply has rebounded from the previous month, but it is still not abundant, and the domestic crude copper supply continues to be tight. In May, the domestic crude copper processing fee was still less than 1,000 yuan, until June, when the scrap copper supply was further abundant. The tight situation of crude copper supply eased slightly. 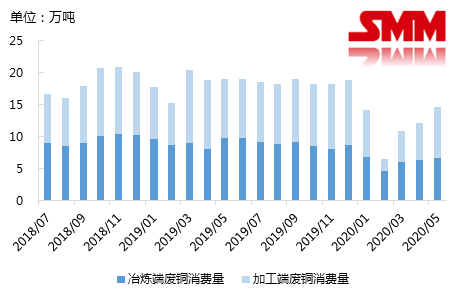 Scrap copper consumption is expected to pick up more significantly in June, mainly because copper prices continue to rise. When the copper price rose to around 48000, the outflow of domestic scrap copper increased significantly; the price difference of fine copper scrap widened to more than 2000, and the orders of the scrap copper rod industry recovered obviously, which also had a great impact on the operating rate of fine copper rods in June. At the same time, the blockade was gradually lifted overseas in late May, and imports of scrap copper will also increase in June.