SMM News: in the first half of the year, Tesla on the other side of the ocean took the lead and its stock price soared, beating Toyota to the top of the world's largest market capitalization car company and becoming a veritable "wealth-making machine".

There is also no shortage of phenomenal commercial dramas among the listed car companies in Hong Kong and Hong Kong. Volkswagen invested heavily in Jianghuai Automobile, "hundreds of billions of giants" Geely Guanke Chuangbang plans to return to A-shares, "National God car" Xiali A-share farewell performance after several twists and turns, BYD semiconductor business spin-off listing speed …. Reflected in the secondary capital market, the stock market of listed car companies has ups and downs, during which there is no lack of thrilling moments.

Among them, the market value of Dongfeng Group shares has shrunk by 20.134 billion yuan, while BAIC has shrunk by 7.208 billion yuan. BYD led the rise of listed car companies in Hong Kong and Hong Kong A, with a combined market capitalization of more than 100 billion yuan, making it a "big winner" in the first half of the year.

In terms of stock prices, Jianghuai Motor is like a "koi possession". After winning six trading boards and rising stock prices in seven trading days at the end of May, it led the share prices of car companies to rise by 75.90% in the first half of the year. However, the share prices of 12 automobile stocks also fell, among which the shares of FAW Xiali, Guangzhou Automobile Group and Dongfeng Group led the decline in A shares and Hong Kong stocks, both by more than 30%. 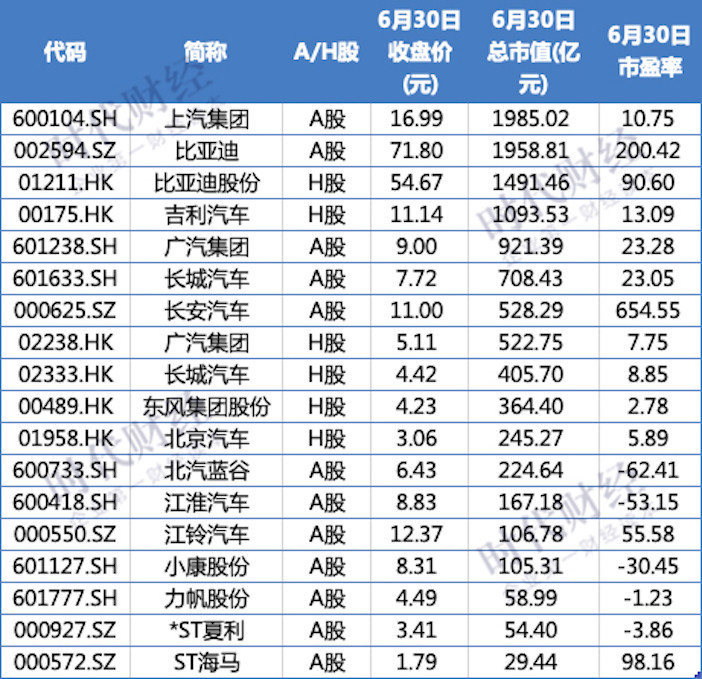 On July 3, Cao he, secretary general of the Automobile Chamber of Commerce of the all-China Federation of Industry and Commerce, said that the soaring market value of BYD had something to do with the Tesla concept and the market price of new energy vehicles. At the same time, its stock market performance was also affected by the spin-off listing of the semiconductor business. To a certain extent, the transformation of traditional car companies under the wave of scientific and technological innovation has become an inevitable trend, which may also become one of the ways for car companies to stabilize their market capitalization. "this is determined by the development trend of the automobile industry, but there are differences in different corporate strategies." Cao he said.

In the first half of this year, only six of the 18 shares of listed car companies in Hong Kong and Hong Kong A rose, with Jianghuai Motors and BYD leading the way, up 75.90% and 57.26% respectively. However, the share prices of 12 automobile stocks also plunged, among which the shares of FAW Xiali, Guangzhou Automobile Group and Dongfeng Group led the decline in A shares and Hong Kong stocks, both by more than 30%. 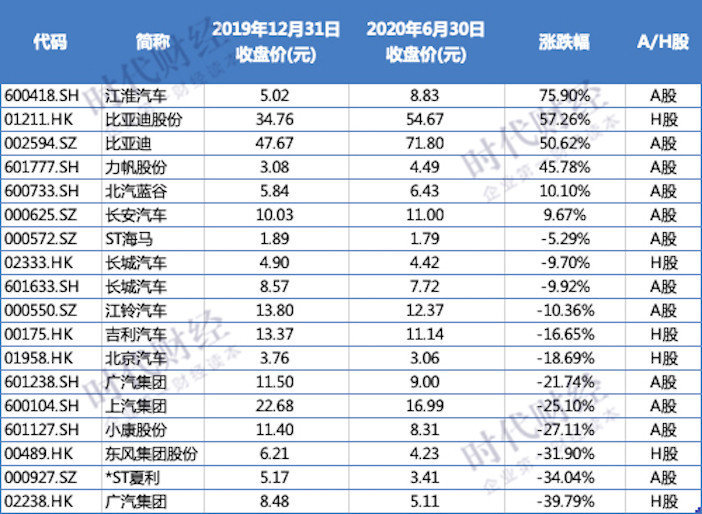 Specifically, the share price of Dongfeng Group fell 31.90% to 4.23 yuan from 6.21 yuan on December 31 last year. In terms of sales, the epidemic superimposed the downward impact of the car market. In the first five months of this year, Dongfeng Group's cumulative sales fell 22.65 per cent year-on-year to 871300 vehicles. Sales picked up in May, and monthly sales rose 17.59 per cent year-on-year.

Revenue in the first quarter of this year fell 29.5% year-on-year to 32.983 billion yuan, while net profit fell 95.04% year-on-year to 60.8498 million yuan, 1.169 billion less than in the same period last year, according to Beijing Automobile's first quarterly report. In 2019, although BAIC's net profit also declined 7.8% from the same period last year, with the strong contribution of nearly 90% of Beijing Mercedes-Benz, Beijing Automobile became one of the few companies in the auto market with positive revenue growth. However, Mercedes-Benz gross profit continues to grow at the same time, the independent sector, which made a big move last year and was pinned by BAIC, has not been able to reverse its losses, with a loss of 4.728 billion yuan in 2019.

In addition, Geely's shares fell 16.65% in the first half of the year. Since the beginning of this year, Geely has a huge demand for funds under the changing environment and transformation and expansion of the car market. Geely announced a rights issue of more than HK $6 billion on May 29th; on the evening of June 17th, Geely said its board approved a preliminary proposal for a possible renminbi share issue and listing on the Shanghai Stock Exchange's Kechuang Board; so far, Geely has launched a pioneering version of the listing mentoring.

Shen Meng, executive director of Xiangsong Capital, told time Finance that Geely has always had a need for financing, and that when the company is large, it also needs continuous capital to expand. From the valuation point of view, the valuation of A-shares will be much higher than that of Hong Kong stocks.

BYD led the rise in the market capitalization of Hong Kong A and Hong Kong A by more than 100 billion.

In the first half of this year, of the 18 shares of car companies listed in Hong Kong A and Hong Kong A, the market value of 12 stocks shrank, with a total loss of 208.3 billion yuan. Among them, SAIC and Guangzhou Automobile Group led the decline, while BYD led the rise in Hong Kong and Hong Kong A, soaring market capitalization of 54.204 billion and 65.83 billion yuan respectively, up 120 billion in half a year.

The sharp rise in BYD's market capitalization may have an impact on the spin-off and listing of its semiconductor business. On April 14 this year, BYD announced that it had reorganized and renamed Shenzhen BYD Microelectronics Co., Ltd. and established BYD Semiconductor. From April when it was announced that it was seeking a spin-off listing to mid-June, BYD Semiconductor completed two rounds of financing in just two months, totaling nearly 2.7 billion yuan.

Among them, in the announcement on June 15, BYD Semiconductor announced that it had completed the introduction of A+ round investment, with a total of nearly 800 million yuan in funds. and attracted Xiaomi Yangtze River Industrial Fund, Lenovo Yangtze River Science and Technology Industrial Fund, country Garden Innovation Investment, including 30 war investors. And with the listing of semiconductors, BYD's market capitalization is expected to be positive again.