There are two main reasons for the rise in Tesla's share price:

On the one hand, according to Tesla officials, in the first quarter of 2020, Tesla produced nearly 103000 electric cars and delivered about 88400, an increase of 14% over the same period last year, the best first-quarter performance in Tesla's history. It was previously reported that Tesla plans to recall some workers at its Fremont, California plant at the end of April, but the mayor of San Francisco has said that the "stay-at-home" ban in the area is likely to be extended beyond May 3, which means Tesla is likely to restart some production before the ban is lifted. 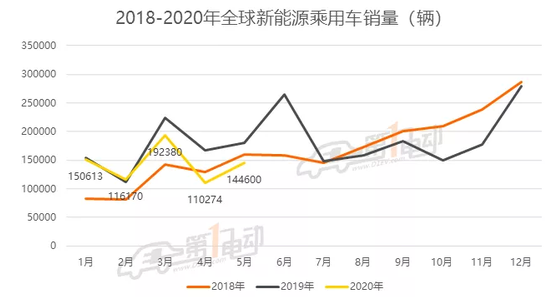 According to EVsales, global sales of new energy passenger vehicles reached 145000 in May, up 31.1% from a month earlier and down 19.3% from a year earlier. Tesla Model 3 has global sales of 20, 000 vehicles and its Chinese market accounts for 53.2 per cent. So far, Tesla's cumulative global sales of the Model 3 have exceeded 100000, making it the only model so far this year that has sold more than 100000. On the other hand, Tesla signed a three-year battery pricing agreement with Panasonic to expand Nevada superfactory capacity. Tesla also plans to build a battery research facility and manufacturing plant in Fremont, California. The whole project is codenamed "Road Runner". It is estimated that the construction of the project, including the installation of all manufacturing equipment, can be completed in about three months.

Guoyuan Securities predicts that the continuous promotion of the policy will help guide the healthy development of new energy vehicles. With the increase of new energy subsidies in European countries and the smooth progress of domestic resumption of production, domestic and foreign sales are expected to become regular in the third quarter compared with the same period last year, and the performance of relevant listed companies is expected to be improved. In terms of target selection, the middle field pays attention to the leading enterprises in the subdivided fields of positive electrode, negative electrode, diaphragm and electrolyte, and the leading performance elasticity in the downstream power battery field will also be more obvious.

Founder Securities believes that recently, the European new energy vehicle support policy continues to increase, which is more radical than China's new energy vehicle support policy, reflecting the resolute attitude of European automobile electrification. Globally, the market policies of new energy vehicles in Europe and China have exceeded expectations, the Tesla plant in the United States has resumed work, and the wave of localization of Tesla has brought historic opportunities to auto parts. China's growth rate has become regular in May. Auto stocks ushered in the layout opportunity.

Panasonic to Expand Lithium-ion Battery Capacity for Vehicle Market
Japan-based Panasonic will expand its lithium-ion battery capacity at one plant in Himeji, Japan.