CST
translation
Source:SMM
[SMM analysis: multiple factors drag forward iron ore prices below the 700 mark but there is still a chance to rebound] overall, the current policy news is mainly negative iron ore, coupled with a pullback after the rally, short-term iron ore from strong to weak. But in terms of fundamentals, there is nothing wrong with the demand side, and it has mainly followed the mature operation in the near future. If steel demand remains strong, iron ore should still have a chance to rebound in June. 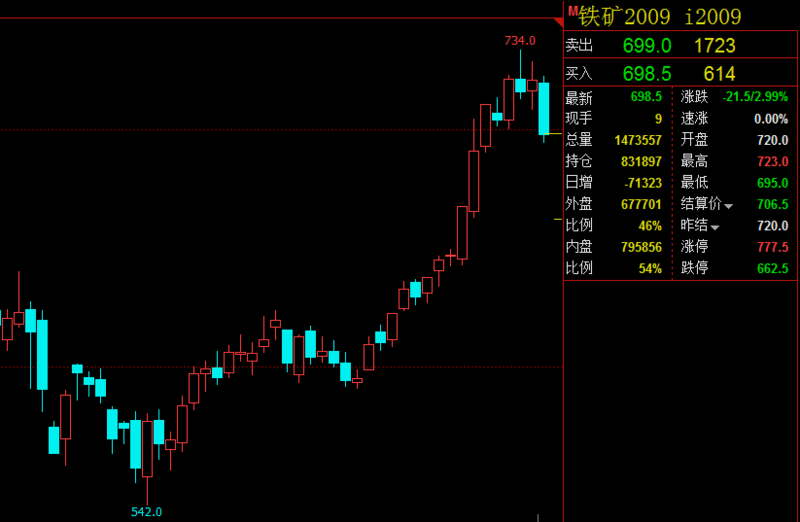 Early iron ore pulled up too sharply, touching the pressure level pullback. Since the opening of the two sessions last week, iron ore futures have risen rapidly, rising from 647 yuan / ton on May 14 to a peak of 734 yuan / ton on the 22nd, an increase of more than 13%. Although the Tangshan municipal government suddenly issued a notice to adjust the management and control measures in May, releasing a signal to relax production restrictions and low inventory support, the sharp increase in mineral prices on the disk and the negative impact of macro policies have led to a pullback in expected prices.

The shipments of foreign mines have soared, and the pressure of supply shortage has been alleviated. SMM tracking data show that the current period of incoming cargo is expected to be 13.37 million tons, a month-on-month drop of 140000 tons. In this period, the ship-to-ring ratio increased in Tangshan area and decreased in Shandong area. However, during the period, Australia's port departures increased by 1.62 million tons compared with the same period last year, an increase of 3.16 million tons, or more than 20%. Brazil's port departures also increased by 810000 in the current period compared with the previous period.

During the two sessions, a number of deputies and committee members proposed to increase domestic iron ore production and scrap consumption, which is bad for ore prices. Tan Chengxu, chairman of Angang, suggested supporting the development of domestic iron ore and setting up a development support fund; he Wenbo, member of the CPPCC National Committee and secretary of the Party Committee of the China Iron and Steel Association, suggested that the imported mineral price is contrary to the steel price, and the iron ore pricing mechanism needs to be adjusted urgently. Increase the recycling of scrap resources; Li Lizhang, deputy to the National people's Congress and chairman of Minguang of Sangang: promoting the High-quality Development of the Iron and Steel Industry

Scrap refers to the iron and steel scrap that does not become a product in the production process of the iron and steel plant (such as trimming, cutting head, etc.) and the iron and steel materials in the equipment and components scrapped after use. The composition of steel is called scrap; the composition of pig iron is called scrap, collectively referred to as scrap. At present, the total amount of scrap produced in the world every year is 3 to 400 million tons, accounting for about 45% of the total steel output, of which 85% is used as steelmaking raw materials and 10% is used for casting, ironmaking and recycled steel. At present, the arrival volume of scrap steel is decreasing, and the transaction performance is weakening, but recently, the prices of billets and finished materials have risen sharply, as well as the output of hot metal continues to rise, there is a strong support for scrap, steel mills have made profits and hot metal production has increased, and raw material prices have generally risen.

Overall, the current policy news is mainly negative iron ore, coupled with a pullback after the rally, short-term iron ore from strong to weak. But in terms of fundamentals, there is nothing wrong with the demand side, and it has mainly followed the mature operation in the near future. If steel demand remains strong, iron ore should still have a chance to rebound in June.

Singapore Iron Ore Week: Iron ore prices to rally in near term
Iron ore prices may see a catch-up rally in the next few weeks as the fundamentals look strong in the short term, according to Ian Roper, general manager of SMM International.

SMM Iron Ore and Steel seminar at SIOW
Join us at SMM’s iron ore and steel seminar during Singapore Iron Ore Week on Tuesday May 22, at the Fullerton Hotel.

Iron Ore Evacuation Continues to Increase This Week
As per statistics of SMM Steel, up to Dec.1st, inventory at 35 ports reaches 131.65 million tons, rising 1.41 million tons on weekly basis.