CST
Source:SMM
China's imports of bauxite, the main ore source of aluminium and which has to be first refined into alumina, rose to a record high in the March quarter, due to greater demand and lower sea freight costs.

SHANGHAI, May 21 (SMM) – China's imports of bauxite, the main ore source of aluminium and which has to be first refined into alumina, rose to a record high in the March quarter, due to greater demand and lower sea freight costs. 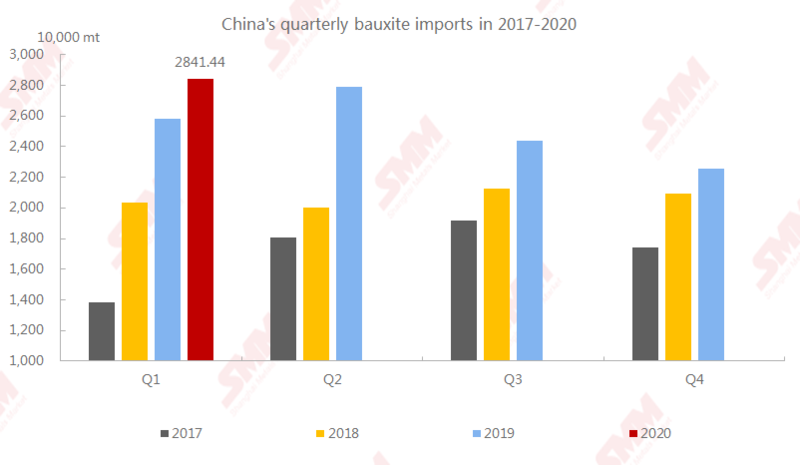 The Republic of Guinea remained the top bauxite exporter to China, and its first-quarter supplies were barely changed at 13.37 million mt from a year earlier, accounting for nearly half of China’s total bauxite imports.

Australia and Indonesia took the second and third places. China’s bauxite imports from Australia increased 22.95% year on year to 9.24 million mt in Q1, while those from Indonesia jumped 46.45% to 4.73 million mt.

The ramp-up of alumina refineries that have upgraded their facilities to adapt foreign ore, a decline in logistical costs caused by lower sea freight rates and subdued recovery of domestic mines due to COVID-19 boosted China’s demand for imported bauxite to an all-time high in Q1.

Exclusive: China's base metals output in May
China’s copper cathode output continued to rise in May after some of the smelters recovered from maintenance.

Alumina prices to extend near-term rally on coronavirus impact
The amount of capacity cutback (including the affected roasting capacity) at Chinese alumina refineries due to the coronavirus outbreak has climbed to 4.6 million mt/year, with the domestic alumina...