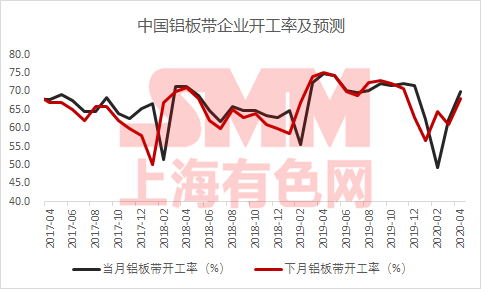 According to the research, the significant increase in the starting rate in April is mainly due to the contribution increment of the large plate and strip enterprises, and the operation rate of the large enterprises is significantly higher than that of the previous month, especially in Henan, and the output of the local leading plate and belt enterprises is close to full production in April. and the orders of individual large enterprises have been arranged to June or even the beginning of July, the small and medium-sized plate and belt enterprises are slightly inferior. In terms of orders, thanks to the warming of the construction industry and the medical industry, the performance of building plates and medical device plates and strips was excellent, and the relevant orders even made up for the decline in foreign trade orders, but the performance of orders for automobile-related plates and strips was poor, such as brazing and radiator plates and strips. SMM has learned that several well-known domestic enterprises specializing in the production of automotive plates have indicated that their output in April is lower than that in March compared with their orders. However, the fuel tank orders for heavy trucks are relatively good. In other aspects, the performance of tank orders in April was weak and did not improve significantly. In addition, the foreign trade orders concerned by the market before, as expected by the market, the foreign trade orders of plate and strip enterprises, which account for a relatively large proportion of domestic exports, fell back by 10%-30% in April compared with the previous month, which did have an impact on their own operations, but through product structure adjustment and domestic market development, At present, this part of the impact is not enough to drag down the development of the overall operating rate; As far as the region is concerned, at present, the orders of enterprises in North China, such as Henan and Shandong, are relatively better than those in Zhejiang, Fujian and other places.

As far as May is concerned, although some large enterprises said that the good development state in April can basically last until May, from the feedback of more small and medium-sized enterprises, hidden worries remain in May, as the impact of the foreign epidemic on foreign trade orders has not abated, and in May, due to the impact of low speculative hoarding by middlemen and customers, or the pre-order effect, and as aluminum prices rise and the pace of hoarding draws to a close, This part of the order increment will decrease rapidly. On the whole, the operating rate of China's aluminum plate and strip industry is expected to fall from April to May, but it is still maintained at more than 60%.