CST
Source:SMM
China’s imports of aluminium scrap expanded in March, as secondary aluminium producers in the country rushed to fulfill backlogged orders after suspending production for more than a month due to the COVID-19 outbreak. Data from China customs showed that China imported 77,000 mt of aluminium scrap last month, down 39.1% from March 2019. That brought total imports in the first three months of 2020 to 199,000 mt, down 40.1% from the same period last year.

SHANGHAI, Apr 28 (SMM) – China’s imports of aluminium scrap expanded in March, as secondary aluminium producers in the country rushed to fulfill backlogged orders after suspending production for more than a month due to the COVID-19 outbreak.

China’s imports of aluminium scrap in March rose 29.8% from February. That was propelled by an increase in inflows via processing trade, as China’s exports of unwrought aluminium alloy jumped more than 376% in the same month. 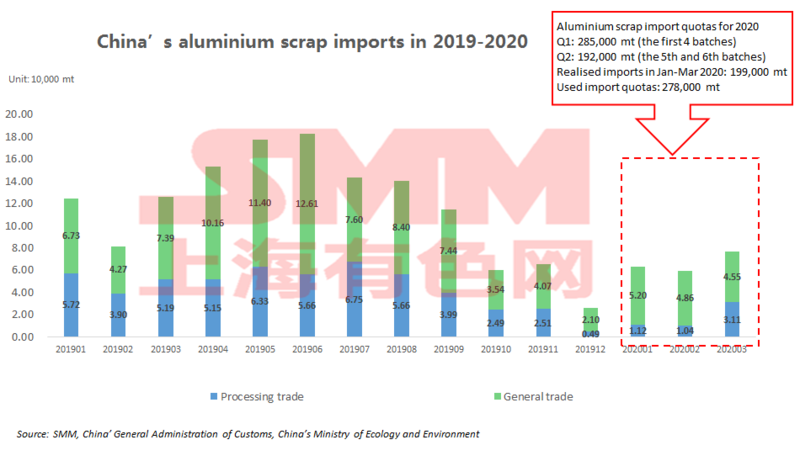 Most of Chinese secondary aluminium producers did not resume production until March, which boosted demand for imported aluminium scrap and led to the sharp increase in finished goods exports. Consumption of secondary aluminium at home and abroad, however, has generally dropped as measures to contain the spread of the pandemic slowed global economic activities.

China's environmental authorities have issued a total of 476,679 mt of aluminium scrap import allowances in six batches for 2020. The first four batches—about 285,000 mt— were for the first quarter, exceeding realised imports during that period by about 86,000 mt, and there are 278,000 mt of import quotas still valid for the second quarter.

As for unwrought aluminium alloy, China’s imports resumed their increase in March, gaining 44.8% from February to 83,200 mt, some 1,050% higher than March 2019, thanks to the arrival of orders placed before the Lunar New Year holiday. 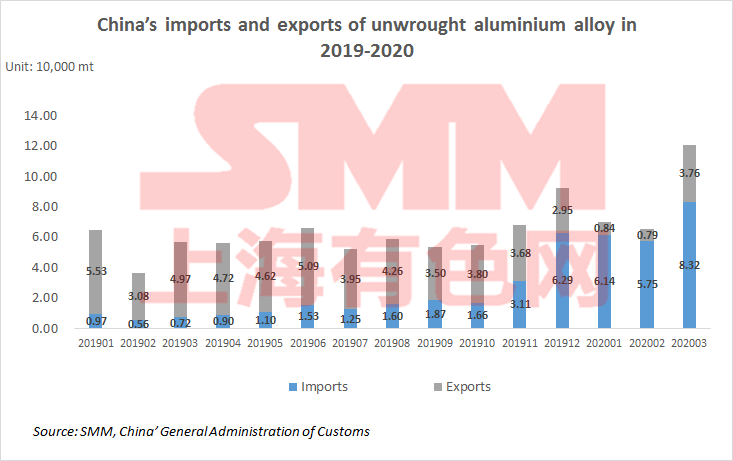 Malaysia and South Korea remained the major unwrought aluminium alloy suppliers last month. In April, imports of such material are expected to shrink significantly as the price gap between China and overseas narrowed. 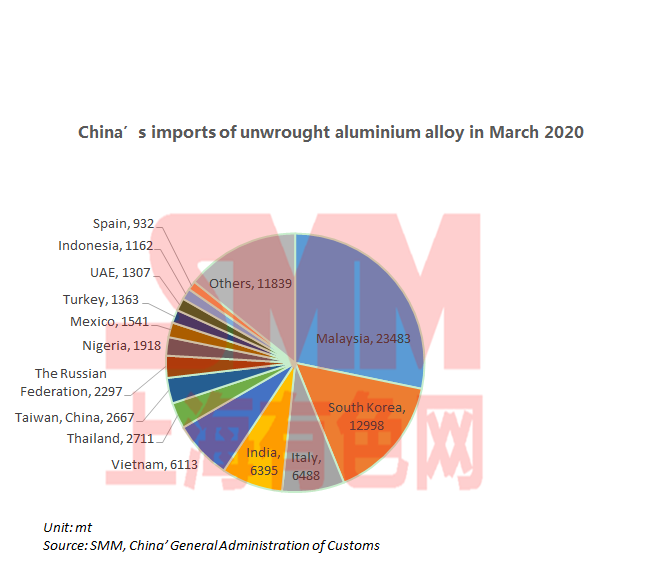 China’s imports of unwrought aluminium alloy totalled 202,100 mt in the January-to-March period, up 797.4% from the same period last year.

SMM Morning Comments (Jul 29): Shanghai Base Metals Trending Mixed after Obscure Fed Meeting Results
Shanghai base metals traded mixed after opening on Thursday morning, as Fed failed to set a timeline for tapering asset purchase, and COVID-19 pandemic made a comeback. Meanwhile, their counterparts on LME mostly went up.

Restoration of MFN tariff on solid waste imports to have little impact on aluminium industry
The Office of the Customs Tariff Commission of the State Council issued an announcement to make appropriate adjustments to the provisional import tax rate implemented in 2020.

SMM Morning Comments (Dec 24): Shanghai base metals rose across the board as investors eye developments on Brexit trade deal talks
Shanghai base metals advanced across the board on Thursday morning, holding onto overnight gains, while their counterparts on the LME set for a mixed start, as investors expect a Brexit trade deal between the UK and the European Union as it approaches the deadline.