CST
translation
Source:Smm steel
At a time when the market is generally expected to see a sharp decline in steel exports, the March data showed a higher-than-expected growth. What are the reasons for that? SMM believes that steel exports in March may not be sustainable, in the current severe epidemic situation, steel exports in the second quarter may be down about 27% from the first quarter.

From January to March, China exported a total of 14.286 million tons of steel, down 16.1 percent from the same period last year, according to customs data on April 14. According to monthly data, steel exports rose sharply by 71.5% in March from a month earlier, up 2.3% from a year earlier to 6.476 million tons. At a time when the market is generally expected to see a sharp decline in steel exports, the March data showed a higher-than-expected growth. What are the reasons for that? SMM believes that steel exports in March may not be sustainable, in the current severe epidemic situation, steel exports in the second quarter may be down about 27% from the first quarter. 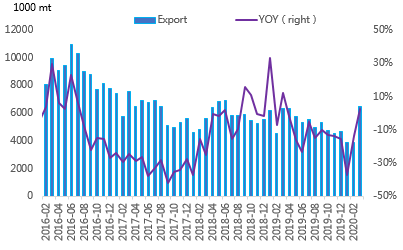 There are two main reasons for the higher-than-expected growth in exports in March: one is the accelerated performance of pre-orders brought about by the resumption of work by domestic foreign trade enterprises in March; the other is the issue of shipping dates. In general, exports in March came from orders received in January and February, and at that time, the overseas epidemic had not yet broken out, so the impact was relatively limited. On the contrary, exports have been boosted by the gradual relaxation of Sino-US trade negotiations. The overseas epidemic, the "black rhino", has changed the originally good situation of foreign trade. Since late March, with the outbreak of the overseas epidemic, China's exports have been affected, but this impact has not yet been reflected in the export data.

SMM believes that in the current situation, March exports in excess of expectations will be short-lived. With the spread of the epidemic overseas, countries around the world have taken "city closure", shutdown and other measures, seriously affecting the demand for Chinese steel and steel products. As can be seen from the export data of China's mechanical and electrical products, the cumulative value from January to March decreased by-13.4% compared with the same period last year, down 37.8% from the 24.4% growth rate in February 2018.

Fig. 2 A sharp decline in the export of China's mechanical and electrical products 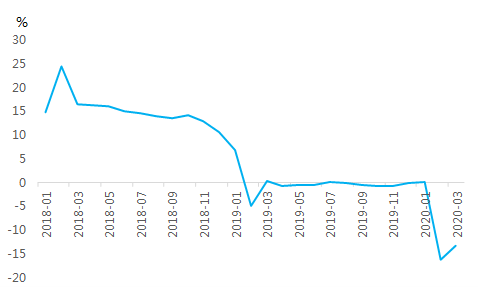 In the short term, the global epidemic has not seen signs of inflection point, but has accelerated the spread of the trend. At present, more than 120 countries have taken measures to restrict the flow of people and logistics. According to the SMM grassroots survey, many export enterprises report that orders have been cancelled and postponed, and it is much more difficult to sign new orders. China's exports will face severe challenges in the second quarter. According to the SMM export model, steel exports in the second quarter may be 27% lower than in the first quarter, or about 3.86 million tons.

Strong opposition to US tariffs on steel, aluminium: China Ministry of Commerce
China warned that it will take a strong stance to protect its interests against US President Donald Trump's tariffs on steel and aluminium imports.