CST
translation
Source:SMM
According to SMM statistics, the operating rate of the aluminum profile industry was 54.92% in March, up 26.30% from the previous month, down 5.49% from the same period last year.

According to SMM statistics, the operating rate of the aluminum profile industry was 54.92% in March, up 26.30% from the previous month, down 5.49% from the same period last year. 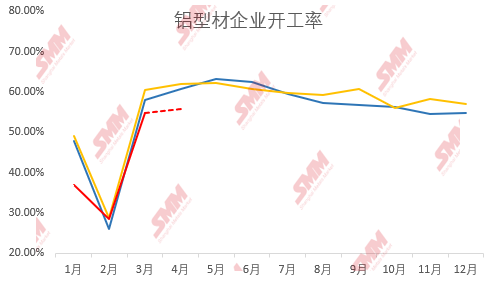 In March, the domestic epidemic situation was basically controlled, the progress of enterprise start-up production accelerated, and profile enterprises in Hubei also resumed production one after another, so the operating rate of the aluminum profile industry rebounded sharply from the previous month; however, the overseas epidemic has a greater impact on export-oriented profile enterprises, so it has declined from the same period last year.

In terms of scale, the month-on-month increase in the operating rate of large, small and medium-sized enterprises is more than 20%, among which large enterprises have the largest month-on-month increase, and large enterprises have obvious advantages in personnel, orders, anti-risk ability, etc.; according to categories, the operating rate of industrial profile enterprises is more than 60%, and the operating rate of construction profiles is slightly lower, but it has also reached 53.73%. From the specific feedback, some serious epidemic areas and small enterprises have just returned to work in early March, and only a small number of large-scale enterprises have just returned to work at full capacity; after the problem of employee isolation basically ended in mid-March, the opening rate of enterprises has continued to rise; domestic demand orders began to break out in the latter ten days, but the impact of export orders also affected the production of some profiles. In terms of terminals, there is strong demand in real estate, infrastructure and other industries, with some enterprises with abundant orders scheduled for more than a month, while demand in automobile, photovoltaic and other industries has shown a downward trend, and new orders have been reduced to varying degrees.

Raw materials and finished products, affected by price factors, profile enterprises mostly purchase raw materials according to orders, but also a small number of low-price hoarding, and due to the sharp drop in aluminum prices led to a reduction in shipments of aluminum bar holders, some areas of profile enterprises have a difficult to find difficulties; for end customers in low aluminum prices in advance orders also have strict pick-up cycle requirements, as far as possible to avoid the accumulation of finished goods inventory. In addition, some customers under the impact of the epidemic force majeure breach of contract, which also makes profile enterprises in the signing and implementation of new orders more strict and cautious.

The expectations of enterprises for April are also divided, industrial profile enterprises are slightly pessimistic compared with construction profile enterprises, or directly or indirectly affected by exports, but the relatively exuberant domestic demand can make up for some of the export losses in the short to medium term. The overall operating rate of the aluminum profile industry in April may be stable.