CST
translation
Source:SMM
SMM conducted a survey of the aluminum plate and strip market in March and learned that the average weighted operating rate of China's aluminum plate and strip industry was 62.25% in March, up 13 percentage points from the previous month, down more than 10 percentage points from the same period last year, and is expected to fall slightly to 61 per cent in April 2020.

SMM conducted a survey of the aluminum plate and strip market in March and learned that the average weighted operating rate of China's aluminum plate and strip industry was 62.25% in March, up 13 percentage points from the previous month, down more than 10 percentage points from the same period last year, and is expected to fall slightly to 61 per cent in April 2020. 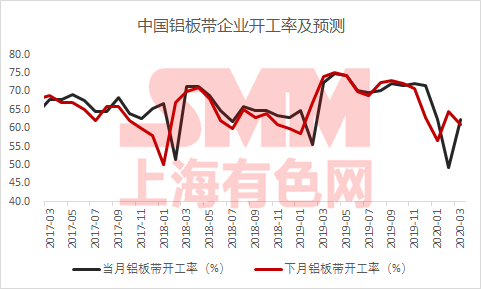 At the beginning of March, most of the production conditions of plate and strip enterprises in the industry returned to normal, and some enterprises were still in a state of semi-shutdown due to less orders and slow rework of employees. The start-up rate in March was higher than that in February, mainly due to the fact that most of the plate and belt enterprises in the industry were on holiday in February due to the influence of the epidemic situation, and the start-up rate was relatively low in March, while in March, with the gradual resumption of work and resumption of production, the start-up rate was also relatively higher, and some of the order production plans delayed during the February holiday were released in March, resulting in a significant increase in the start-up rate in March.

Last year, it is still worse than last year, and the terminal consumer market is limited by the weak performance of the epidemic. According to the order category, the performance of building plate and 3C electronic material is relatively stable, the performance of packaging orders such as tank material is relatively weak, the worst is automobile plate, the domestic automobile industry is depressed in March, and foreign car factories in Japan, Europe and the United States and Europe and the United States have stopped production, which has a direct impact on the export of relevant automobile aluminum and domestic trade orders. In addition, most of the aluminum plate and strip enterprises reported that the severity of the epidemic abroad gradually escalated in the middle and late March, and export orders were significantly affected. Customers have withdrawn orders and delayed pick-up of shipments, or customers have been affected by the foreign epidemic and then reduced their orders for cooperation with themselves. In the aspect of finished product inventory, most of the enterprises feedback that their finished product inventory is high, mainly due to the slow pick-up of end customers, and there is obvious pressure on their own funds.

As far as April is concerned, the current corporate feedback is not optimistic. First of all, the export proportion of large plate and strip enterprises in Shandong, Henan, and Fujian is relatively high, between 30% and 50% as a whole, and about 20% of the indirect exports of small and medium-sized enterprises also exist. However, the epidemic situation has not yet appeared an inflection point overseas, and there is even a further serious trend. Overseas countries have adopted measures to seal off countries and ports, and it seems to have become an established fact that export orders continue to decline from April to May. Against the background of weak domestic trade orders, Foreign trade has made matters worse, and the start-up rate in April is expected to be lower than in March.