CST
translation
Source:SMM
According to the SMM new energy database, the production of new energy vehicles in March was 52000, down 51.8% from the same period last year, and the installed capacity of power batteries in March was 2.8 GH, down 45.6% from the same period last year. The production and sales of new energy vehicles in the first quarter is not optimistic, the global epidemic affects the overall consumption level of consumer groups. With the extension of subsidy policies and the introduction of local subsidies, the new energy industry is expected to have a greater recovery in the second quarter, but not as good as last year, the whole new energy industry still needs to wait for the second half of the economy to recover before there will be a big increase.

SMM, April 13: in March 2020, with the resumption of production of car companies and battery factories, the production and sales of new energy vehicles and the installed capacity of power batteries increased significantly month-on-month. But production and sales are still lower than in the same period last year, as demand for new energy end-consumer purchases has not recovered in March.

In March 2019, the subsidy policy fell to the ground, and production and sales rose sharply year-on-year and month-on-month due to the subsidy buffer period on June 25. In March this year, the overall production and sales volume was significantly better than in February, but affected by the epidemic, major car companies and battery factories gradually returned to work, but the frequency of end customers going out shopping declined, the situation of live online car sales was not satisfactory, and the production and sales of new energy vehicles grew slowly. But this month, most automakers grew more than 100% month-on-month, such as BYD, Tesla, BAIC, Guangzhou Auto, Jianghuai, brilliance BMW, etc., especially Tesla and BYD competed for first place this month. In the end, BYD won the production championship in March with its local advantages and many models, but Tesla is not outdone. It is already ranked second with only one model, and the competition between the two automakers is expected to be more intense in the future. 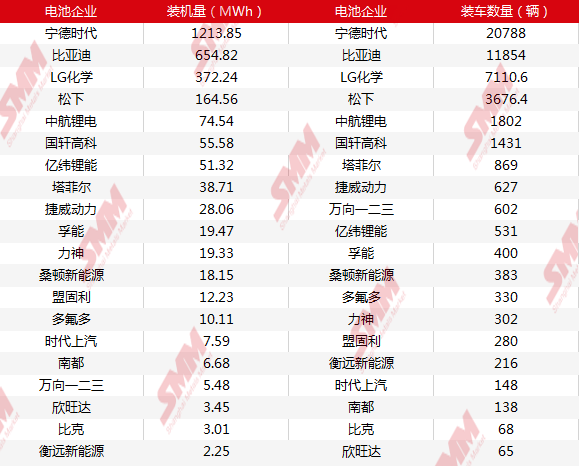 From the battery enterprise installed models, the largest number of loaded enterprises are Ningde era, BYD, LG Chemical, Panasonic and AVIC Lithium Power. In the ranking of power battery installed capacity in March, Ningde era still has the highest market share, basically flat from the previous month, about 43.8%. At the same time, it is also the most loaded battery enterprises, mainly carrying Guangzhou Auto passenger cars, BAIC, ideal cars, brilliance BMW and so on. BYD returned to second place in terms of installed capacity this month, mainly due to a sharp increase in BYD's production of new energy vehicles, surpassing Tesla in March. LG Chemical, which runs Tesla, has seen a rebound in BYD's installed capacity this month, with a market share down 13.4 per cent from the previous month. In addition, this month, AVIC lithium power ranking rose to fifth from the ninth last month, the market share also increased from 0.8% to 2.7%, the main customers Changan and Guangqi production has increased greatly. In March, the market concentration rate of power battery installed capacity was still very high, with CR10 of 96.5%, CR5 of 89.5% and CR3 of 80.9%.

According to the China Automobile Association forecast, although with the industry enterprises orderly resumption of production progress accelerated, sales are gradually rising, the second half of the year may have the same level as the same period last year, but the losses suffered in the first quarter are irreparable. In addition, the domestic epidemic has had a great impact on transportation, tourism, catering, retail and manufacturing industries. According to relevant data, 247000 enterprises across the country closed from January to February, which seriously affected the income of the working population and led to a decline in automobile consumption power. In addition, the outbreak of overseas outbreaks, port closures and other prevention and control measures in more countries will have an impact on the incomes of overseas consumers, which will also lead to a decline in sales of new energy vehicles.

According to SMM, judging from the production and sales of new energy vehicles in March, the entire industry is gradually recovering after the impact of the epidemic, overall production and sales fell sharply in the first quarter, and the recovery of terminal consumer demand still needs to wait. In addition, the epidemic situation at home and abroad has caused damage to the macro-economy, and the consumption level of many consumer groups has been reduced. With the extension of subsidy policies and the introduction of local subsidies, the new energy industry is expected to have a greater recovery in the second quarter, but not as good as last year, the whole new energy industry still needs to wait for the second half of the economy to recover before there will be a big increase.

CST
special issues
China to Scrap Massive Motive Batteries by 2020
A considerable amount of motive batteries will be scrapped in China by the year 2020.