SMM4 month 9: the recent market trading sentiment significantly improved, black thread continued to rise. In the near future, the resumption of work has accelerated the increase in steel consumption, and inventories have continued to decline month-on-month. And iron ore also rose sharply to pull threads to rebound. Today, thread 2010 rose 2.45% to 3306 yuan / ton, iron ore 2009 up 3.28% to 597.5 yuan / ton, and hot roll 2010 up 1.88% to 3149 yuan / ton. 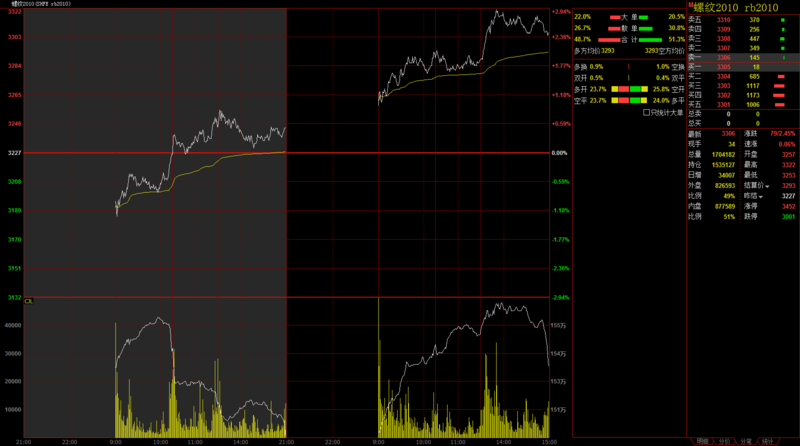 Macro-good frequency, the commodity market is generally upward. In China, at the meeting of the political Bureau of the CPC Central Committee held late last month, it was stressed that the loss of the epidemic should be reduced to a minimum and efforts should be made to achieve the annual target. The meeting also identified the expansion of fiscal space, and the central bank decided to cut the deposit reserve ratio by 1 percentage point for small and medium-sized banks, releasing a total of about 400 billion yuan in long-term funds. In addition, the central bank decided to cut the interest rate on excess reserves held by financial institutions with the central bank from 0.72% to 0.35% from April 7. The central bank cut directly affects mortgage interest rates and promotes the recovery of the housing market, while rebar is mainly used to boost confidence in the real estate market. Abroad, the "big irrigation" in the United States and Europe has had an effect since the beginning of this week, although the epidemic has not changed, but US stocks and other stocks have continued to rise; in addition, the market is generally expected to reach an agreement to cut production in oil-producing countries, and the rebound in international oil prices has led to a collective recovery in commodities.

The inspection and repair of threaded steel is increased to alleviate the supply pressure brought by the electric furnace factory. According to SMM's current public information and research statistics, the output of building materials affected by the overhaul of steel mills in April was 730800 tons, an increase of 97200 tons over the overhaul impact in March (633600 tons). Among them, maintenance focuses on East China and North China, where the current inventory pressure is more significant.

Overall, the number of confirmed outbreaks abroad continues to rise, and the inflection point has not yet arrived. In April and May, the import and export business of steel was still in the doldrums. Moreover, when the scrap price remains low, the operating rate of short-process steel will also remain high. Although the resumption of work such as domestic infrastructure projects is constantly improving, the growth rate of demand is not as fast as the growth rate of supply. Therefore, the early April steel rising space is not much. However, due to the "gold, three, silver and four" steel peak season due to the epidemic and then transferred to the market for later macro stimulus policy optimistic expectations, steel prices may rise later this month.

To apply for entry into the SMM Iron and Steel Industry Exchange Group, please scan the QR code below:

Greater inflow of seaborne steel billet to little impact spot steel prices in China
It is understood that about 60,000 mt of seaborne steel billet will enter China as steel prices in the international market kept declining amid the coronavirus impact. While this grew investors’ concerns that greater inflows of cheap materials could threaten domestic spot prices, the latest SMM survey suggests that the impact will be limited.

Hot-rolled coil, plate output to decline 8.1% in March
An SMM survey showed that Chinese steelmakers plan to produce 8.94 million mt of hot-rolled coils and plates in March, down 8.1% from the realised output of 9.72 million mt in February.