From January to February 2020, China exported about 8538 tons of ternary precursors, down 18.2% from a year earlier, with an average export price of about $13.7 / kg, according to Chinese customs data. From January to February, almost all of the domestic ternary precursors were exported to South Korea; monthly exports accounted for about 42.5% of the total monthly output.

The end of January is the traditional Chinese Spring Festival holiday, overseas customers mostly purchase raw materials in advance. However, the new crown epidemic gradually spread at the end of January, and some domestic ternary material precursor manufacturers could not produce normally because of the epidemic in early February. It is expected that the decline in exports is mainly due to the reduction in production of production enterprises in February.

According to SMM, the domestic epidemic situation was brought under control in March, with the rework rate of domestic ternary precursor enterprises reaching more than 95 percent, and the market operating rate gradually returning to 50-60 percent. The overseas epidemic began to break out after mid-March, and since the markets in Europe and the United States, there has been continuous news of shutdowns or cuts in production in the downstream battery and car markets; in terms of raw materials, the supply of cobalt raw materials has been reduced due to the impact of the epidemic in Africa, and the supply of nickel raw materials has also declined in

At present, China's ternary precursor production schedule in April is normal, but has declined year-on-year, mainly because, in addition to orders affected by the epidemic, the postponement of the retreating of new energy subsidies in 2019 has not been able to emulate the stimulus to production this year. The impact of the overseas epidemic on the raw materials and downstream terminal consumption market is still uncertain. Although the battery and automobile markets in Japan and South Korea are relatively stable at present, from the point of view of exports, orders in the overseas power and digital markets have begun to gradually decrease. Domestic producers are becoming more and more cautious in production, and they are still holding a wait-and-see attitude to the market after May. SMM believes that China's ternary precursor production and exports will decline in the second quarter compared with the same period last year, SMM will also continue to pay attention to nickel, cobalt raw materials and Japan, South Korea, Europe and the United States downstream end markets. 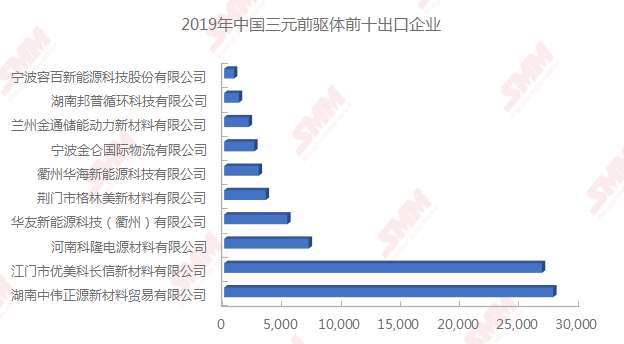 Snapshot: Cobalt, lithium spot market in China
Trading in the spot cobalt and lithium market was thin during the first week of April, SMM learned.