CST
Source:SMM
The coronavirus crisis is providing Chinese manufacturers of electric vehicles and EV batteries with more time to brace for competition from foreign rivals, as factories outside China are shuttered and Beijing would extend subsidies for new energy vehicles to 2022. The State Council, China’s cabinet, on Tuesday announced the two-year extension, among other measures, aimed at reviving its car market which has been hit hard by the pandemic outbreak and slumping demand. Originally, the subsidies were to be terminated at the end of this year.

SHANGHAI, Apr 2 (SMM) – The coronavirus crisis is providing Chinese manufacturers of electric vehicles and EV batteries with more time to brace for competition from foreign rivals, as factories outside China are shuttered and Beijing would extend subsidies for new energy vehicles to 2022.

The State Council, China’s cabinet, on Tuesday announced the two-year extension, among other measures, aimed at reviving its car market which has been hit hard by the pandemic outbreak and slumping demand. Originally, the subsidies were to be terminated at the end of this year.

The government will also compensate for the replacement of diesel vehicles in major population centers like Beijing, Hebei and Tianjin and impose a 0.5% value-added-tax (VAT) waiver for used cars between May 1 to end of 2023.

Aside from efforts by the central government, local governments, including Foshan, Xiangtan, Guangzhou, Zhejiang, Nanchang and Chongqing, have already introduced a raft of measures to support the car market.

For the NEV sector, Tuesday’s announcement came after the Minister of Industry and Information Technology said January that China will not make significant cuts in subsidies for NEVs this year.

Those support measures can no doubt provide some relief to Chinese EV and battery makers, especially those on the verge of collapse following a significant cut to government subsidies and grants last year.

Meanwhile, foreign rivals, with advanced technology, may have to delay new EV model launch and slow their business expansion in the vast Chinese market, as their factories in Europe and the US have been shuttered with the pandemic raging on.

Chinese EV giant BYD is expected to launch its Han flagship sedan model, which will be equipped with the closely-watched Blade Battery, in June. The new model will lead the brand's Dynasty Family, boasting a cruising range of 605 kilometers and an acceleration of 0 to 100km/h in just 3.9 seconds, while the blade-shaped battery is said to solve the safety hazards associated with electric cars.

Other Chinese EV makers including NIO, Xiaopeng Motors and Weltmeister (WM Motor) will also launch new models in the second half of this year.

China’s EV sales look set to pick up in H2, on policy support, performance advances and launch of new models, and as the economy will recover from the pandemic and deployment of charging infrastructure accelerates.

Despite a temporary shutdown because of the pandemic, Tesla’s Shanghai Gigafactory reportedly did not miss its original plan for the first quarter. The factory currently has a production capacity of 3,000 units per week, and foundation buildout for the Phase 2 area has been completed.

The US EV maker cut the starting price of its Shanghai-built Model 3 sedans by 9% at the beginning of the year, and a further cut is expected in H2 as adoption of cobalt-free lithium-iron-phosphate (LFP) batteries and improved supply chain operations will bring costs down. That is expected to attract more buyers and help boost EV sales in China.

With the pandemic raging on and hitting global economy, Chinese consumers’ outlay on big-ticket items like cars is expected to remain subdued into at least the second quarter, trumping policy support and deterring EV sales from substantially picking up before H2.

China wants all taxis on its roads to be electrified by 2023, with large cities such as Beijing, Shanghai and Guangdong aiming for a 2020 deadline.

Timeline—China’s stimulus policies for the auto sector in 2020 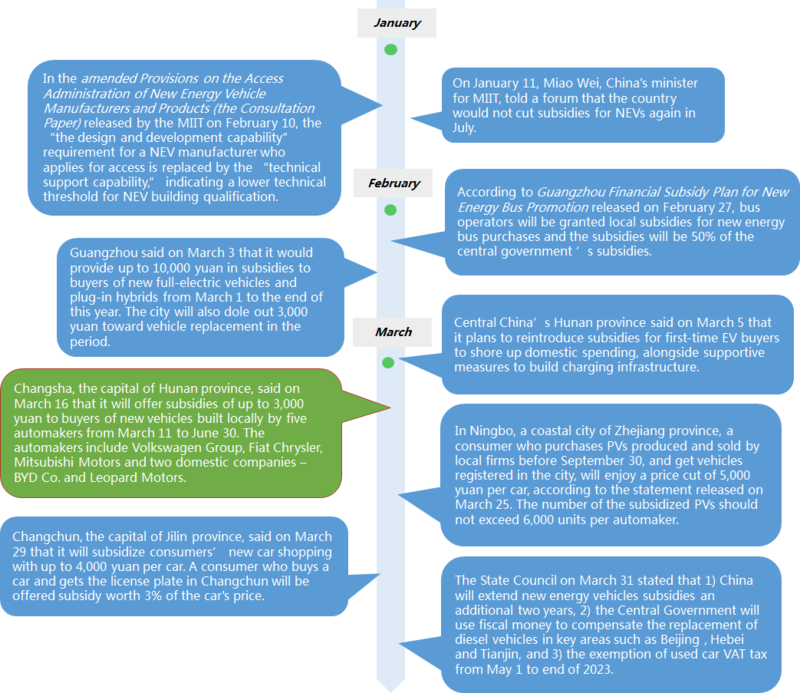 Egypt Plans to Invest $127 million to Produce EVs
Egypt has joined the ranks of popularising EVs in the Middle East, requiring a state-owned company to cooperate with a Chinese company to produce affordable EVs, while using Egypt’s booming renewable energy to power these automobiles.

How will SVOLT Energy’s cobalt-free battery technology shake the future of cobalt metal?
According to statistics from the United States Geological Survey in 2015, the world's proven land cobalt resources were about 25 million mt, with reserves of 7.2 million mt. The Democratic Republic of Congo, Australia and Cuba accounted for 68% of the global cobalt reserves. Congo (Gold) is the country with the most abundant cobalt reserves. As of 2014, cobalt reserves in Congo stood at 3.4 million mt, accounting for more than 50% of the world’s total.

China May NEV production dropped 32.3% from a year ago
China’s production of new energy vehicles continued to decline sharply in May from a year earlier, indicating that the market recovers slowly from the Covid-19 pandemic.

All
MOST POPULAR
1.SMM Morning Comments (Jan 30): Base Metals Closed Mostly with Losses on Rising US Dollar
2.SMM Morning Comments (Feb 2): Base Metals Closed Mostly with Losses Following US Rate Hike
3.SMM Morning Comments (Jan 31): Base Metals Closed with Losses on Worries over Chinese Demand Recovery
4.The Global Nickel Industry Could Another Shock as the Second Largest Supplier of Nickel Ore Is Mulling over Export Tax
5.SMM Review of China's Metals Market during CNY Holiday and Forecast
Shanghai Metals Market
Privacy PolicyCompliance CentreSMM Credit ServiceContact UsAbout UsTerms & ConditionsSitemap
Notice: By accessing this site you agree that you will not copy or reproduce any part of its contents (including, but not limited to, single prices, graphs or news content) in any form or for any purpose whatsoever without the prior written consent of the publisher.