CST
Source:SMM
Prices of spot manganese have not received significant support from the resumption of downstream demand and have extended their slide this week. SMM expects the prices will remain weak with pressure from elevated inventories of #200 cold- and hot- rolled stainless steel.

SHANGHAI, Mar 13 (SMM) – Prices of spot manganese have not received significant support from the resumption of downstream demand and have extended their slide this week. SMM expects the prices will remain weak with pressure from elevated inventories of #200 cold- and hot- rolled stainless steel.

As of March 12, transaction volumes of downstream #200 series stainless steel picked up slightly from end-February, but this remained overshadowed by the arrivals of new cargoes, which kept social inventories at high levels. Fob prices of manganese departing from Chinese ports have declined $285/mt from end-February to $1,530-1,550/mt as of March 13, SMM assessed. The steep decline in prices has raised bearish prospects among market participants. 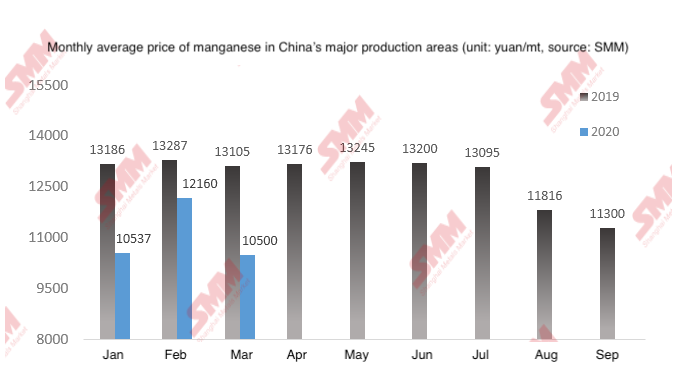 SMM China Chromium-Manganese-Stainless steel industry chain weekly
The nickel industry is in the limelight in the non-ferrous metals commodities market since 2020, as demand and supply fundamentals have become more volatile.

Spot copper trades weakened on coronavirus fears, thinned enquires at month-end
Transactions in the spot copper market declined on the morning of February 26 in Shanghai as intensified concerns about the coronavirus impact depressed demand for risk assets and the enquires from...

Buildup in copper cathode inventories in Guangdong will be capped
SMM does not expect any further significant buildup in stocks as smelters will seek to ease inventory pressure in south China by shipping cargoes to other regions and piling up stocks of sulphuric...

All
MOST POPULAR
1.SMM Review of Pre-Holiday Base Metals Market and Prospect
2.Macro Roundup (Sep 29)
3.Silver Prices Kept Falling amid the Hawkish Remarks in the Market
4.SMM Analysis: Tungsten Prices Kept Falling amid Poor Pre-Holiday Stocking, Post-Holiday Outlook Remains Bleak
5.Macro Roundup (Sep 22)
Shanghai Metals Market
Privacy PolicyCompliance CentreSMM Credit ServiceContact UsAbout UsTerms & ConditionsSitemap
Notice: By accessing this site you agree that you will not copy or reproduce any part of its contents (including, but not limited to, single prices, graphs or news content) in any form or for any purpose whatsoever without the prior written consent of the publisher.