CST
Source:SMM
China’s imports of nickel ore continued to fall in January, as Indonesia’s export ban came into force and the wet season in the Philippines has yet to come to an end.

SHANGHAI, Feb 27 (SMM) – China’s imports of nickel ore continued to fall in January, as Indonesia’s export ban came into force and the wet season in the Philippines has yet to come to an end.

China imported 2.68 million mt of nickel ore and concentrate last month, down 38% from December, marking a fourth straight month of declines, according to SMM calculations based on data from China customs.

Imports from Indonesia accounted for 1.38 million mt, down 44% from a month ago and 11.9% from a year ago, as they were shipped before Jakarta banned exports of nickel ore from January 1.

China’s total nickel ore imports in January were 7.4% higher than the same month of 2019, as those from the Philippines registered a year-over-year increase of 42.9%.

In January, China’s nickel ore imports from the Philippines fell 34.1% from December to 1.01 million mt due to the ongoing wet season.

Following the outbreak of the COVID-19 coronavirus, the Philippine banned vessels from calling at its ports less than 14 days after they called at any China port, which has delayed shipments of nickel ore to China.

That, coupled with the continued wet season, is expected to lead to the fifth consecutive month of declines in China’s nickel ore imports in February, in anticipation of no imports from Indonesia.

Compared to shrinking imports of nickel ore, China’s imports of ferronickel and nickel pig iron (NPI) are growing as Indonesian smelters stepped up their exports following the commissioning of new facilities. That is set to create a ferronickel and NPI supply surplus in the Chinese market in the first quarter, as stainless steel mills in China have curtailed production significantly amid the epidemic outbreak. 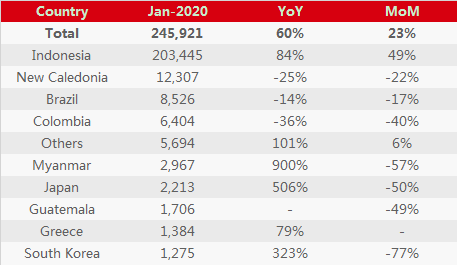 Indonesia was the biggest ferronickel and NPI exporter to China, and its exports have been on the increase on the back of growing production domestically.

The Morowali project put four furnaces under operation in December to January, which will drive ferronickel and NPI exports to China in February to March. Two furnaces at the Weda Bay project kicked off the commissioning process earlier this month, and are expected to see the first batch of output in March to April at the earliest.

In Indonesia, limited new NPI capacity is expected to come on stream in the first quarter, while stainless steel capacity commissioned at the start of this year has increased local consumption of NPI, which will temporarily slow the growth in NPI exports to China.