CST
Source:SMM
A potential demand recovery delay is set to weigh on prices of steel in the short term

SHANGHAI, Jan 30 (SMM) – Demand for steel in China after the Lunar New Year holiday looks set to recover later than previously expected as the Chinese local governments have decided to extend the holidays to contain the rapidly-spreading novel coronavirus.

Authorities of cities or provinces including Shanghai, Beijing, Guangdong, Fujian, Zhejiang, Jiangsu and Chongqing, have announced that enterprises are not to resume work earlier than midnight on February 9. That came after the nationwide extension of the Lunar New Year Holiday by three days to February 2. Northern regions like northeast China and Hebei where see a low degree of population mobility, will follow the nationwide extension to February 2. 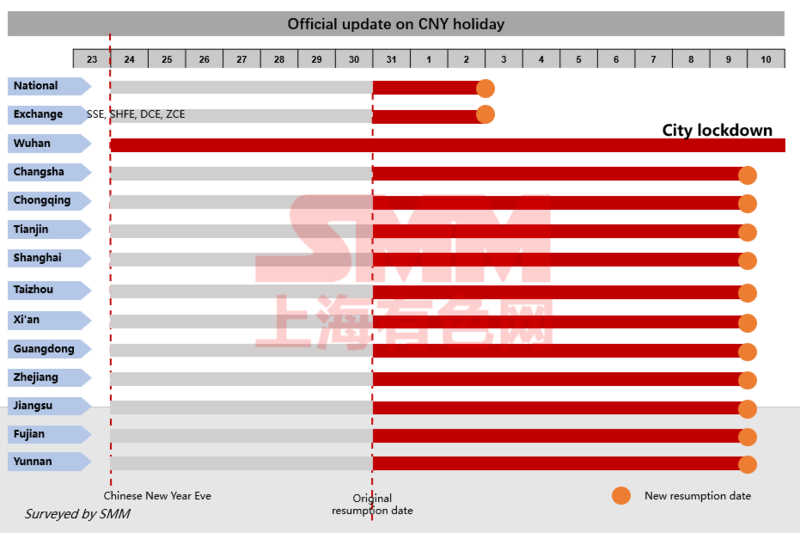 A potential demand recovery delay is set to weigh on prices of steel in the short term, as steelmakers have kept their blast furnaces running during the holidays. SMM conducted a survey to assess the impact of the holiday extension on the whole steel industry.

Inventories of the steelmaking feedstock at Chinese mills are expected to satisfy demand through February 8, thanks to amply stockpiling ahead of the holidays. Iron ore stocks at Chinese ports have accumulated during the holidays, suggesting sufficient supply for steel mills’ replenishing their stocks after returning from the holidays. Ports in Tangshan are currently shuttered and will remain so until further notice.

Most blast-furnace steelmakers will follow the nationwide holiday extension, recovering operations on February 3. Operating rates at electric arc furnace (EAF) steelmakers and re-rollers, however, are likely to take a hit from the coronavirus outbreak, as such steelmakers are mostly located in east, south and central China where saw a bigger number of confirmed virus cases and stricter control. 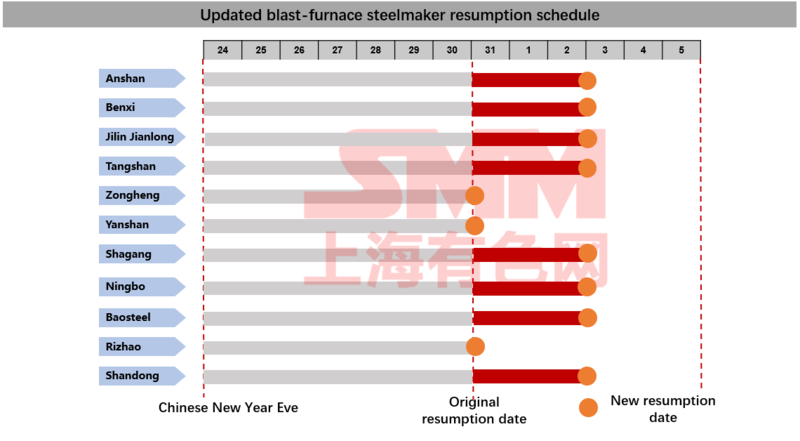 Traders to postpone their return to the markets

Traders in south China and other regions where are more severely affected by the epidemic, plan to return to the markets on February 10, while those in the north where feel less severe impact, will resume operations on February 3.

Comparing to construction, demand for steel from manufacturing is more likely to take a hit from the holiday extension. Under their original plans, most construction sites would resume operations after February 8, while manufacturers of home appliances, cars and other products planned to resume work from January 31.

Road transport is the worst hit by the epidemic outbreak which has led to the closure of roads, while ship transport feels the impact with people kept from travelling back to work. Rail transport, except for routes that pass Wuhan, is limitedly affected.

Pre-holiday stockpiling to underpin rebar prices
Spot prices of rebar will face downward pressure to recover this week as supply still firms at high levels and end-users demand has yet to shake off the impact of seasonality, which continues to weigh on market sentiment and deter shipments. Nonetheless, the spot prices will be underpinned on optimism that the recent outbreak of COVID-19 cases in Beijing is under control with a decline in confirmed cases in the city and on expectations of stepped-up purchases ahead of the three-day Dragon Boat Festival holiday.

Daily crude steel output at CISA key mills in May jumped 6.8% from month ago
Crude steel output across major mills in China averaged 2.09 million mt per day in the last 11 days of May, up 0.58% from the level seen in the second 10 days of the same month and nearing the record high of 2.11 million mt notched in mid-September 2019, according to data from the China Iron and Steel Association (CISA) released Wednesday.

China HRC inventories fell faster on strong demand recovery
SMM data showed that HRC stocks across social warehouses and steelmakers decreased 4.56% in the week ended April 16 to 5.02 million mt, marking a fifth straight week of decline and larger than a 3.59% fall in the previous week.