CST
data analysis
Source:SMM
China imported 7.21 million mt of bauxite in November, up 11.38% from a month ago but down 10.9% from a year ago 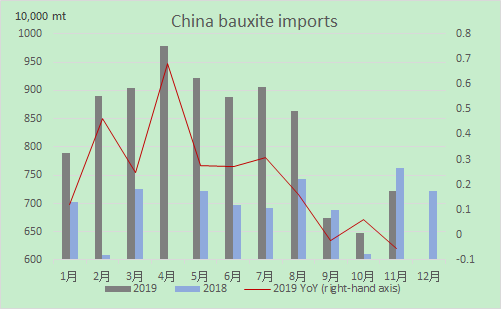 In November, Australia, the Republic of Guinea and Indonesia remained the top three bauxite exporters to China, with their combined volume accounting for 92.03% of the total.

Imports from Guinea rose 11.98% last month, as shipments recovered from the rainy season, while volumes from Indonesia jumped 39.45%.

Update: The story was updated to show bauxite imports in January to November and changes in imports from Guinea and Indonesia, and added a chart.

China’s bauxite imports hit record high in Q1
China's imports of bauxite, the main ore source of aluminium and which has to be first refined into alumina, rose to a record high in the March quarter, due to greater demand and lower sea freight costs.

China bauxite imports exceeded 100 million mt in 2019, up 21.91%YoY
Last year, the Republic of Guinea, Australia, and Indonesia remained the top three bauxite exporters to China, with their combined volume accounting for over 94% of the China’s total bauxite imports