CST
Source:SMM
In Jan-Oct, materials from top supplier Indonesia soared 130% YoY amid additions of new smelting capacity in the country

SHANGHAI, Nov 27 (SMM) – About 168,800 mt in physical content of nickel was imported into China in the form of ferronickel (FeNi) and nickel pig iron (NPI) in October, showed the latest Customs data.

Indonesia, New Caledonia, and Colombia were the top three suppliers to China last month, accounting for 125,200 mt, 9,792 mt, and 7,496 mt of imports, respectively. 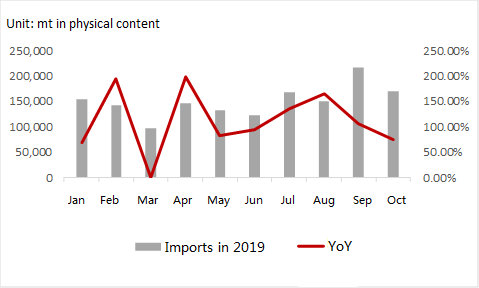 Imports in the first ten months of the year grew 99% from the same period in 2018, and stood at 1.49 million mt in physical content.

In January-October, materials from the top supplier Indonesia soared 130% on the year amid additions of new smelting capacity in the country. The world’s top nickel miner would ban nickel ore exports from January 2020 as it seeks to process more of its resources at home.

During the first ten months of this year, imports from Colombia increased 43%, while materials originated from New Caledonia, Myanmar, and South Korea shrank year on year.

New Caledonia’s Koniambo nickel plant strived to resume to normal production levels after it shuttered on a leak accident in late-June, SMM learned. The smelter produces FeNi with a grade of 50%, with an annual production of 28,300 mt in Ni content in 2018.

SMM expects the monthly average imports of FeNi and NPI in October-December at 30,500 mt in Ni content, following a jump in imports in September for making up for unfulfilled shipments in August.

Imports in September were assessed at 34,500 mt in Ni content, according to SMM data.