SMM10, March 25-Manganese sales (about 48 percent of the group's total sales) fell 6 percent to 427 million euros in the third quarter of 2019. The decline in prices and the adverse product mix effects of ores and alloys were partly offset by an increase in ore sales. Global production of carbon steel, the main final product of manganese, remained stable at 468 Mt in the third quarter, reflecting a trend of contrast between China and the rest of the world (+ 3.5%). This trend is still driven by the construction and infrastructure industries (- 4.1%).

However, Chinese production, which accounts for about 55 per cent of global production, slowed in September from a record monthly level in the first half of 2019. Production in the rest of the world was adversely affected by a sharp decline in EU demand (- 6.7 per cent) and a slowdown in North American demand (+ 1.0 per cent). In the first nine months of this year, carbon steel production reached a record 1.4 billion tons, an increase of 3.2 per cent over the same period in 2018.

Global manganese ore producers continue to operate at full capacity, with a slight overbalance between supply and demand in the third quarter of this year and the first nine months of the year to date. At the end of September, ore stocks at Chinese ports were 4 Mt, stable compared with the overall level. The average price of manganese ore in CIF China fell further to $5.66 per dry tonnage in the third quarter, down 17 per cent from $6.83 per dry tonnage in the third quarter of 2018. Taking into account the appreciation of the dollar, the euro fell by only 13%. However, for the first nine months, the average ore price remained at a high of $6.17 per dry tonnage (down 14 per cent compared with the same period in 2018).

In Gabon, Comilog's manganese ore production reached a record 1.3Mt in the third quarter of this year (up 11 per cent from the third quarter of 2018), and the amount of manganese ore produced and transported increased by 30 per cent. The steady and substantial growth reflects mining and improved logistics performance. During this period, external sales also increased by 12% to 0.9 tons. 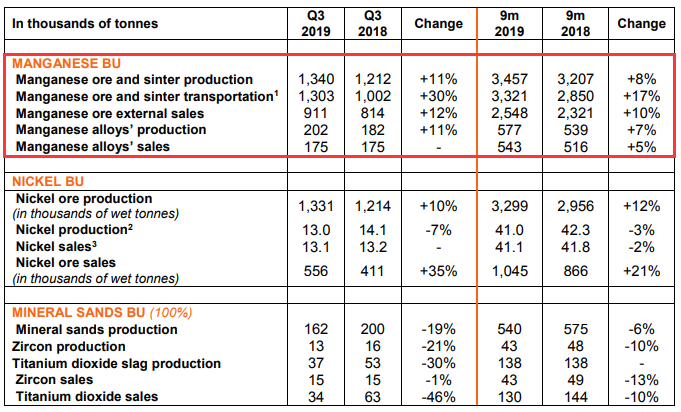