In the steel price "stumbling" to slow down, the expectation of environmental protection and production restriction policy has become the supporting point of market sentiment. Under all expectations, today, a "notice on the city's enhanced air pollution control plan in August" (on behalf of the draft) flowed out, if the later official documents do not change much, then according to the documents, Tangshan production restrictions will be relaxed in August. Among them, it is mainly reflected in the production-limiting equipment and the proportion of production-limiting: 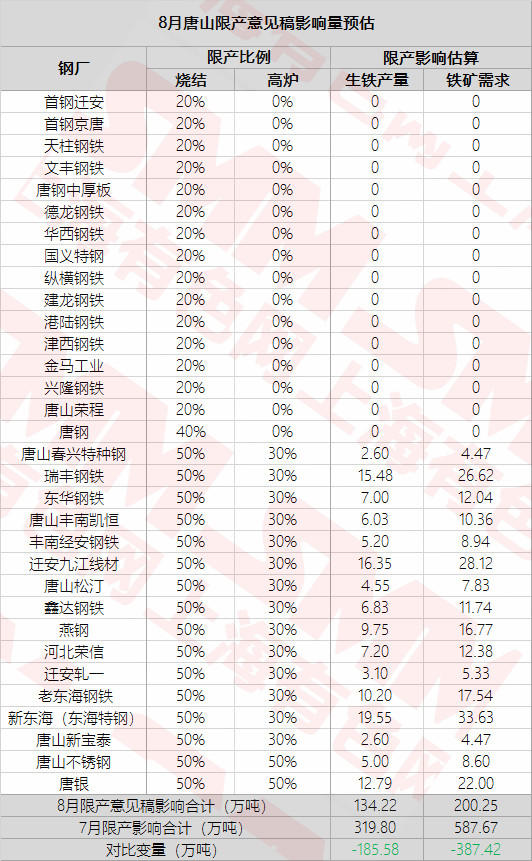 If the Tangshan area production limit in August is really implemented in accordance with this proposal, it will add another fire to the steel production that fell slightly in July, and the upward risk of steel prices will also increase again. Therefore, in this expected case, this thread, hot coil surface a "green light", only iron ore "a little red in the green bushes."

MOST POPULAR
data analysis
1.Macro Roundup (Sep 9)
data analysis
2.Iron ore arrivals at Chinese ports rose 520,000 mt on week
data analysis
3.Macro Roundup (Sep 8)
data analysis
4.Macro Roundup (Sep 11)
smm insight
5.SMM China Steel Scrap & EAF Weekly — Keeping you in touch with the Chinese ferrous metals markets
China Metals Market
Privacy policyCompliance CentreSMM Credit ServiceContact UsAbout UsTerms & ConditionsSitemap
Notice: By accessing this site you agree that you will not copy or reproduce any part of its contents (including, but not limited to, single prices, graphs or news content) in any form or for any purpose whatsoever without the prior written consent of the publisher.