This week, although nickel prices fell sharply from their highs, nickel pig iron was very strong, rising rather than falling, narrower than pure nickel stickers, from last week's highest discount of 65.3 yuan per nickel point, once narrowed to 20.5 yuan per nickel point on Wednesday.

In the process of communication between SMM and the market, there may be three reasons, which can be divided into two categories: temporary and persistent.

On the one hand, this part of the hidden inventory may be that there is a time difference between the already produced but not yet negotiated prices, which may lead to this part of the nickel pig iron becoming inventory; on the other hand, it may also be that some sellers are optimistic about the later market and take the initiative to accumulate part of the inventory.

According to some industry insiders, the volume of imports in June may have fallen short of previous market expectations. On the one hand, transportation may have been blocked as a result of the floods in Indonesia in June, some shipping schedules have been delayed, and arrival in Hong Kong in June has been reduced; on the other hand, due to economic considerations, some Indonesian nickel pig iron has been sold to other countries, such as India, but this component is not yet aware of the difference from the previous month. In terms of economy alone, it is true that the price difference between imports of Indonesian nickel pig iron in June was not satisfactory. (import data are still subject to the final customs data)

Because of the value of iron with multiple nickel spots, higher nickel pig iron should theoretically be a liter of water. However, as shown in the figure below, nickel pig iron has been at a discount to pure nickel since February and March this year, and in recent weeks, the discount has expanded until this week, but it is still in a discount state. In addition, the economy of high nickel pig iron is better than that of waste stainless steel in the near future, and the discount continues to expand. 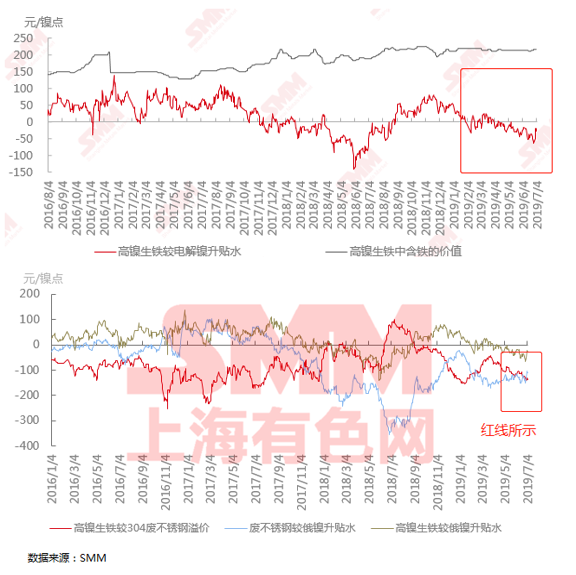 However, the extent to which this substitution can be achieved is not only an economic consideration, the process and raw material ratio of each steel mill are also different, in addition, the taste of nickel pig iron also plays a role in limiting the amount of substitution, and this substitution is a gradual process.

At present, the raw material ratio of each steel mill on the market is different, according to this year's Q1 data, synthesize each steel mill to look, the comprehensive use proportion of nickel iron should be below 60%. At present, the steel mill with the highest proportion of nickel-iron use on the market should be Qingshan in Indonesia, which can reach more than 90%, provided, of course, that the taste of nickel-iron is high enough (Indonesia's Qingshan nickel-iron taste is about 13.5%, which can not be reached in China at present).

Based on the above information, several assumptions are made here to facilitate the calculation:

1 assume that the output of the 300th series in June is 1.1 million tons (the output data published at the later stage of the specific output shall prevail)

2 it is assumed that the proportion of nickel-iron use increased by 5% in June (which may replace pure nickel or waste stainless steel) may actually be less than 5%.

In addition, 110 to 8 percent to 88, 000 to 30 percent to 26, 400 tons of metal, which could theoretically boost demand for about 26400 tons of ferronickel. (provided that ferronickel is tasteful enough to be difficult to achieve at present)

June and July itself is also in a transitional period from shortage to surplus, even if there is surplus, the amount is small, so in the case of demand-side boost and supply-side reduction, the current ferronickel market is still in a tight state. However, in the later stage, with the release of new capacity of nickel iron in Indonesia and the requirements of factories and traders for capital liquidity, SMM believes that the reduction in invisible inventories and imports cannot be sustained for a long time, and that consumption boosted by economy on the demand side is also a gradual process. At present, the impact may be relatively limited, so there is still greater pressure on the nickel and iron market in the later period, but how much replacement can take place? And how fast the replacement is still an unknown, so it is not difficult to understand why some sellers will be relatively optimistic about the market.