And recently in the process of communication with the market, SMM found that the current market nickel iron did not show the phenomenon of oversupply, the overall balance. After communicating with some people in the industry, it is speculated that there may be three reasons why there is no surplus of ferronickel in the market at present.

First, the economy is good, steel mills have increased the proportion of nickel-iron use, replacing the use of part of the waste stainless steel. High nickel iron because of its own gift of iron value (200 yuan / nickel point or so), in theory, more pure nickel should be higher water, but since February to March this year, nickel iron has been in the state of discount, and in recent weeks, the discount has been expanding, so that nickel iron than waste stainless steel discount has also recently expanded, this part of the alternative to ferronickel demand has been boosted. 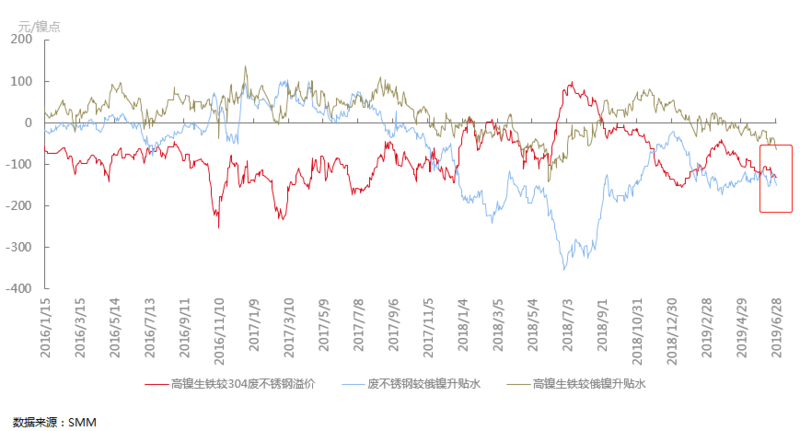 Second, there may be invisible inventory in the market;

Third, Indonesia's nickel iron imports in June may not be as expected (based on customs data).

If the reason one can continue to replace, there is a certain support for the demand for ferronickel in the medium to long term, but in the replacement of waste stainless steel and ferronickel, there are not only economic considerations, the process of each steel mill is also different, some steel mills said that at present, there is indeed an increase in the proportion, but more limited, for some of their own waste proportion is even more limited. In addition, the second and third reasons can not fundamentally reduce the supply of ferronickel. Looking forward to the later stage, there is still a lot of pressure on the ferronickel market.

But at the same time, stainless steel prices rose this week, slightly more active than before, if next week nickel prices can still maintain this week's high, in the current ferronickel market has not yet shown surplus, ferronickel may rise. However, if the stainless steel price increase, transaction improvement can not be sustained, the steel mill under the pressure of profit, there will still be further requirements for the raw material end. However, it is relatively certain that ferronickel will continue to maintain the sticker.