SMM6 26 June: June 25, local time, Chuquicamata copper mine strike into the 12th day, miners will block the road to the copper mine for several hours, in order to prevent unstriking miners from entering the mining area.

The industry estimates that the strike has reduced production at Chuquicamata copper mine by about 10, 000 tons, compared with 321000 tons at Chuquicamata last year. The strike also cost Codelco more than $50 million.

The continued fermentation of the strike will have a greater impact on copper supply in Chile, especially in the face of frequent accidents among mining companies around the world this year and a contraction in the supply of copper concentrate, the Chuquicamata strike is even worse. 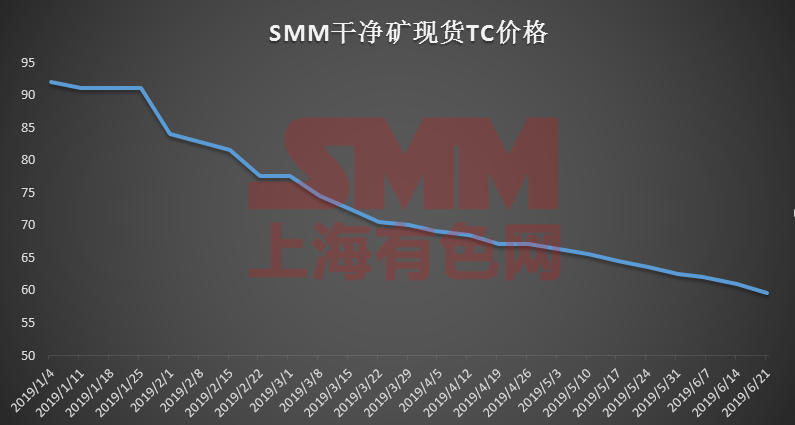 At the beginning of this year, the long single TC price signed by the CSPT group was US $80.8 / ton, which was already at a low level at that time. However, according to the latest TC data from SMM, the spot TC of SMM clean mine was US $57 to US $62 as of June 21, and the transaction center of gravity has moved down further. At present, the transaction of copper concentrate TC in the market has been below US $60 / ton, which is about 35.3% lower than at the beginning of the year. The continuous decline in the price of superimposed sulfuric acid has increased the production pressure of some small and medium-sized smelters in China. "correlation Analysis-[SMM Analysis] Chilean National Copper Codelco Chuquicamata Workers strike Copper concentrate TC decline