On June 22, the Tangshan municipal government held a related meeting on the theme of environmental protection. Stimulated by this news, the price of Tangshan billet rose by 70 yuan / ton in just two days. Today, the price of Tangshan billet rose again by 50 yuan / ton to 3580 yuan / ton. On the 23rd, Tangshan issued "on doing a good job in the city's iron and steel enterprises to stop production restrictions," one stone to stir up thousands of waves, "as soon as the news came out, under the market expectation of tightening environmental protection restrictions, the current price of ferrous metals skyrocketed today. 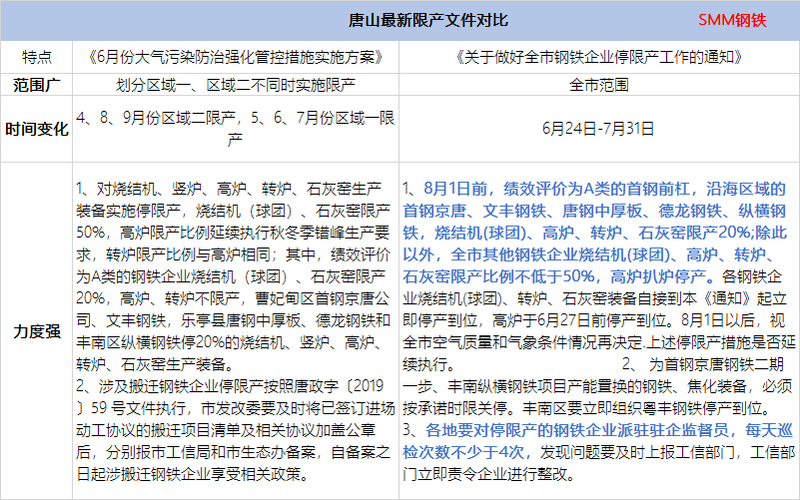 According to the documents released this time, it is imperative to tighten the environmental protection production restrictions, not only from the area where the production restrictions should have been implemented from June to July to the whole city, but also to strengthen the production restrictions, even steel enterprises involved in relocation are also inevitable. In addition, the document also requires all localities to stop production of iron and steel enterprises stationed supervisors, the number of inspections every day not less than 4 times found problems should be promptly reported to the industrial credit department, the industrial credit department immediately ordered the enterprise to carry out rectification and reform.

At present, the specific implementation is as follows:

Steel mill B (Fengnan District): sintering and blast furnace from now on to limit production, is currently looking for a construction team, stop production of 1080 blast furnace, can be implemented this week. It affects the amount of iron water 3000 tons per day, and the overall influence on sintering is 7-8 kilotons.

Steel mill C (Zunhua area): there are now a total of three blast furnaces, which have so far been limited to 50%, and two small blast furnaces are still out of production.

Steel plant D (Caofeidian): one of the three blast furnaces is currently out of production and has a production reduction plan under the influence of policy, but it has not yet been implemented.

In addition to Tangshan, recently, Wu'an, Anyang and other regions have also issued environmental protection production restrictions, in the case of limited production of sintering machine, iron and steel enterprises can increase the procurement of lump ore, pellets to maintain production, so the impact on the output of crude steel and pig iron is relatively limited, the follow-up implementation of SMM will continue to track.

Most Read
data analysis
1.Long-term demand for copper, steel and zinc may be underestimated by the market
data analysis
2.Macro Roundup (Nov 23)
data analysis
3.Stainless steel imports and exports increased in October, with imports rising to a new high of 200,000 mt
data analysis
4.Macro Roundup (Nov 25)
data analysis
5.China stainless steel imports rose 16.9% in October, higher at 207,000 mt
China Metals Market
Privacy policyCompliance CentreSMM Credit ServiceContact UsAbout UsTerms & ConditionsSitemap
Notice: By accessing this site you agree that you will not copy or reproduce any part of its contents (including, but not limited to, single prices, graphs or news content) in any form or for any purpose whatsoever without the prior written consent of the publisher.