SMM, June 21 / PRNewswire-Asianet /-according to SMM research, copper stocks in the Shanghai bonded area fell by 20, 000 tons to 462000 tons on Friday (June 14). Mainly due to the reduction in the supply of goods to Hong Kong, while the import window continues to open to customs clearance opportunities. 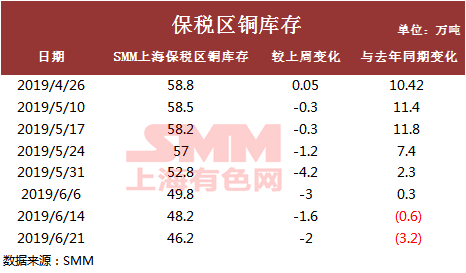 This week, the inventory of the three major exchanges decreased again, with a total of 11000 tons, and the pace of going to the warehouse continued, but the extensive maintenance of the smelter from April to May is over, and the inventory of the last exchange and bonded warehouse decreased by nearly 60, 000 tons compared with the beginning of the year. It is still in the stage of going out of storage, but maintenance began to decrease in June, and the supply of electrolytic copper increased. At the same time, according to SMM, the impact of imported scrap copper supply in the third quarter is limited; but terminal consumption has started a off-season trend, and now spot discount continues to decline, that is, evidence of poor consumption. At the same time, the low proportion of LME's registered warehouse receipts also indicates poor overseas consumption. Therefore, it is expected that with the early maintenance of the smelter output tends to be stable, the world is about to enter the storage stage.