SMM6 17 news: looking back on 2019 has passed half, throughout this year's copper inventory chart is not difficult to find, since the middle and late March this year, the copper inventory has been in a sustained downward trend. According to the latest inventory data released in the previous period as of June 14, inventories have fallen from a peak of 264601 tons to 139556 tons, a decline of about 45 per cent. 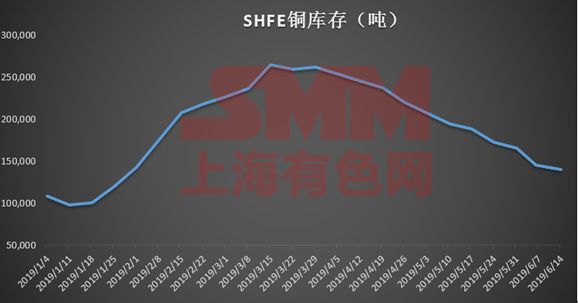 In general, the decline in inventory is closely related to the good performance of terminal consumption. However, according to the current SMM research results show that this year's terminal consumption is "peak season is not prosperous" phenomenon, the copper enterprise start-up rate can better prove this point.

The consumption data of the terminal is the key index to directly reflect whether the consumption is weak or not. A total of 80.3 billion yuan was invested in power grid projects across the country from January to April this year, down 19.1 per cent from a year earlier, according to the China Power Union. On June 12th, the China Association of Automobile Manufacturers released data showing that domestic car sales reached 1.913 million in May, down 16.4 per cent from a year earlier. Of these, passenger car sales were 1.561 million, down 17.4 per cent from a year earlier. On the same day, the Ministry of Industry and Information Technology released statistical data on the domestic mobile phone market in May, which showed that the total shipment volume of the domestic mobile phone market (including functional phones) was 38.294 million, an increase of 1.2 percent over the same period last year and 4.8 percent from the previous month. This can be regarded as a slight boost to the weak terminal market. However, it should be noted that from January to May 2019, the total shipment of mobile phones (including functional phones) in the domestic mobile phone market totaled 152 million. Down 4.8% from the same period last year,

So in the case of unspeakable improvement in consumption, why is the domestic inventory still falling?

SMM believes that the main reason for the decline in inventory is that the supply of refined copper has declined due to the centralized maintenance of domestic smelters. The planned overhaul impact of the smelter this year is expected to be 290000 tons, an increase of about 100000 tons over last year, the highest in nearly four years. However, the inspection period was concentrated in the second quarter, which is expected to affect production of 190000 tons, accounting for more than 65 per cent of the total impact for the whole year. According to SMM research, affected by maintenance, electrolytic copper production decreased by 50, 000 tons in April from a month earlier, and another 70, 000 tons in May from a month earlier. SMM expects to affect a total of about 190000 tons of capacity in the second quarter. "correlation Analysis-[SMM dry goods] the short-term weakness of copper prices is difficult to change in the long run. Pay attention to the supply of waste and smelters are forced to reduce production.

Second, due to the substitution effect of refined copper on scrap copper in fermentation, which is also a hot issue in the market recently.

The average monthly price difference of refined copper is at 831 yuan / ton in May, which is due to the fact that the price advantage of copper has been greatly weakened as the copper price has hit a new low, resulting in a significant increase in the substitution effect of refined copper on scrap copper. That is to say, the refined copper, which should have been consumed in the terminal area, is now replacing the original consumption of scrap copper.

Therefore, SMM believes that there is no very close relationship between the continuous decline of domestic inventory and terminal consumption, on the contrary, domestic production reduction and scrap copper have played a greater role in stimulating the consumption of refined copper. Therefore, if in the second half of this year, if copper prices do not rise under the support of macro news or fundamentals, the fine scrap price gap will still have room to narrow, so the current trend of falling inventories will continue for a long time.