New energy data in May released this week, the development of the new energy vehicle industry in line with expectations, affected by the decline of subsidies, the year-on-year growth rate has slowed. At the same time, SMM power battery installation data show that the total installed capacity of power batteries in May was 5.68GWh, a slight increase of 4.94% from the previous month and an increase of 22.3% from the same period last year. Among them, the installed capacity of ternary battery is 3.75GWh, accounting for 66.1%, and the installed capacity of lithium iron phosphate battery is 1.73GWh, accounting for 30.5%.

Whether it is the production and sales of new energy vehicles or the installation of power batteries, the year-on-year growth rate has been declining since January this year. On the one hand, it reflects that the demand of the new energy industry has been released ahead of schedule; on the other hand, the phased pain of subsidy retreat is still there. How to effectively balance between alleviating the pressure of cash flow and promoting technology research and development is an urgent problem for power battery enterprises this year.

SMM believes that there are two main factors for the change in the production and sales of new energy vehicles in May. On the one hand, because the industry is pessimistic about the decline of the subsidy policy in 2019 since last year, and the industry expects the new energy subsidy policy to be released at the beginning of the year, so the "rush to install" behavior of car companies also began to appear at the end of last year, and demand has been released ahead of time. On the other hand, the implementation of the "National six" is coming soon, and a large number of "National five" models have been promoted in the near future, which has also led to the transfer of the consumption willingness of some consumers and increased the shipping pressure of new energy vehicles.

The transition period for new energy subsidies is coming to an end, in addition, the third quarter is usually the off-season of the industry, given that the current mainframe and battery plants are in the process of reshuffling, the strategic directions will be quite different this year. We expect downstream demand for new energy to remain weak in the third quarter, focusing on the implementation of the follow-up double points policy. 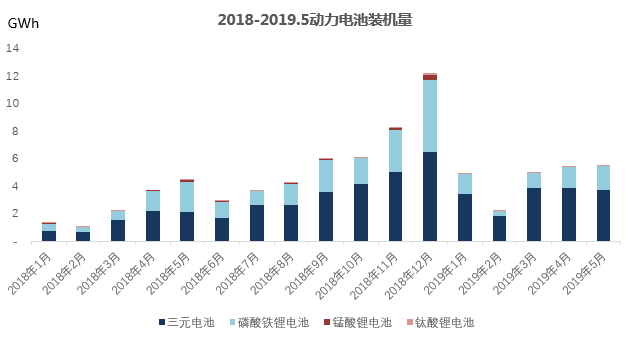 In May, the installed capacity of ternary battery was 3.75GWh, accounting for 66.1%, which decreased by 6.7%, and that of lithium iron phosphate battery was 1.73GWh. accounted for 30.5%, increased by 3.2% compared with the previous month.

Let's take a look at the market share of power batteries in May. 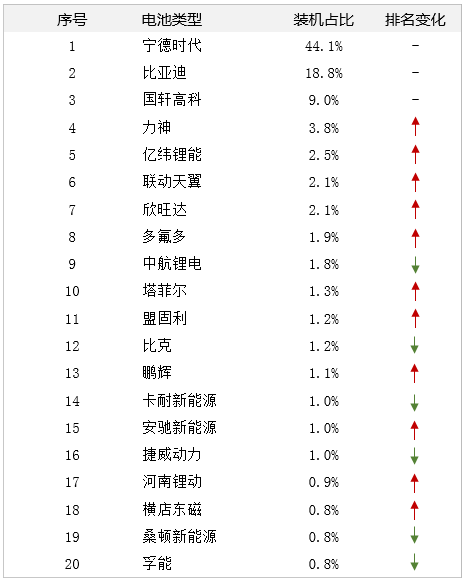 Although BYD was still second in the ranking of power battery installations in May, its market share actually fell 10.5% from a month earlier. Although BYD is currently the industry chain integrity of a relatively high degree of enterprise, but because the downstream customer share is still concentrated in the group itself, affected by the group car production and sales volume, the future can continue to expand downstream customers.

According to SMM statistics, China's ternary material production in May 2019 was 20500 tons, down 5 per cent from the previous month and up 64 per cent from the same period last year. At the end of the subsidized transition period and safety concerns, manufacturers in Beijing, Zhejiang, Jiangsu and Hunan reduced their orders and reduced production to varying degrees in May. Reducers say signs of a pick-up in demand are unclear. It is worth noting that in high nickel, the proportion of 8-series products rose to 11%. The positive material factory said that it was the demand raised by the leading battery factory for the preparation of products after the Spring Festival next year, and the demand for 8-series products is expected to grow slowly in the future.

In May 2019, the national production of lithium iron phosphate was 8400 tons, down 0.1 per cent from the previous month and up 78.9 per cent from the same period last year. At present, the industry concentration of lithium iron phosphate tends to be stable, and the main demand is still power batteries, but a considerable part of the production capacity has been used in the field of energy storage batteries and consumer batteries.

Most Read
data analysis
1.Lithium carbonate prices to continue rally amid falling inventories
industry news
2.Xi Jinping: To enhance price influence of important commodities to better serve and lead the development of the real economy
data analysis
3.Macro Roundup (Nov 23)
data analysis
4.NEV sales to exceed 1.2 million units in 2020 as production soared 104.5% in October
data analysis
5.Macro Roundup (Nov 13)
China Metals Market
Privacy policyCompliance CentreSMM Credit ServiceContact UsAbout UsTerms & ConditionsSitemap
Notice: By accessing this site you agree that you will not copy or reproduce any part of its contents (including, but not limited to, single prices, graphs or news content) in any form or for any purpose whatsoever without the prior written consent of the publisher.