CST
translation
Source:SMM
Roberto Ecclefield, chief business officer of Codelco, said trade tensions between China and the United States had not affected China's demand for copper. But fears of a trade war have sent copper prices to a five-month low, causing losses for many mining companies around the world and discouraging mining companies from investing in projects. Add to the already tight supply at the end of the mine.

According to Bloomberg, Codelco's chief business officer, Roberto Ecclefield, said trade tensions between China and the United States had not affected China's demand for copper. SMM6 10-month news: Bloomberg reported that China's chief business officer Roberto Ecclefield said that Sino-US trade tensions have not affected China's copper demand. But fears of a trade war have sent copper prices to a five-month low, causing losses for many mining companies around the world and discouraging mining companies from investing in projects. Add to the already tight supply at the end of the mine. 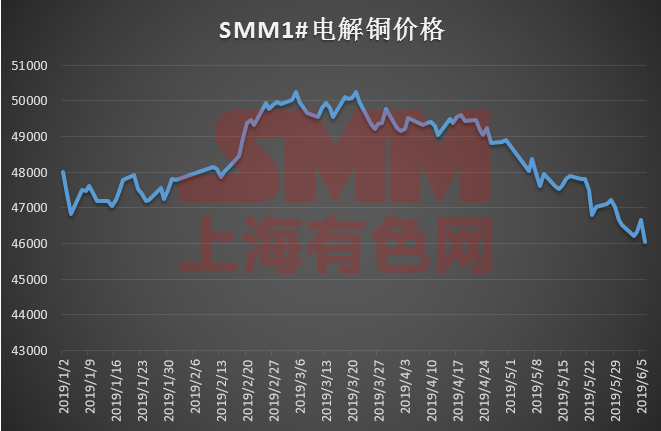 In addition, Codelco's own current strike at the Chuquicamata copper mine could further strain global supply, and negotiations between the company and the unions are continuing. "related news-Codelco's labor negotiations with trade unions will be extended until June 13.

Codelco had previously said it planned to maintain Chuquicamata copper production at about 1.7 million tons a year over the next 10 years.

ICSG6 reported in January-February that global copper production fell 1.8 per cent between January and February, with declines in Chile and Indonesia offsetting growth in other countries. It is expected that there will be a global copper gap of 189000 tons this year.

Nelson Pizarro, the company's chief executive, expects global copper supply to begin to decline in 2022, with a shortfall of 4 million tons in 2028.

Ecclefield also said copper futures in New York had fallen to $2.65 a pound last week, the lowest level since early January. However, mining companies such as Codelco will only be able to start large investments when copper is at least $3 a pound, adding new supply to the market.

(note: this article is translated from Bloomberg. If copyright issues are involved, please contact SMM and we will deal with them in a timely manner.)